The dream is still intact

Share All sharing options for: The dream is still intact

Late Thursday night, as a hush fell over the sold out Rice-Eccles Stadium crowd, reality began to sink in that maybe, just maybe, Utah's dream season was coming to a crashing halt. Brian Johnson had just thrown another incomplete pass and the Utes were forced to punt from their own twenty, giving TCU solid field position for what could likely be the final drive of the game.

On the second play of that drive, Andy Dalton found Jimmy Young down the middle for a huge 22-yard gain. It put the Frogs in field goal range and three plays later, Ross Evans -- who had missed a field goal on their last drive -- lined up in hopes of making it a seven point game.

With that miss, Utah was given new life. They still trailed by a meager four points, but they had two timeouts and over two minutes left on the clock to make something happen. If there was ever a time for Brian Johnson to come alive and keep Utah's dream season afloat, this was it.

A new buzz worked its way through the crowd as the fans began to believe again. Their faith was reinforced by the first three plays of that possession. Johnson first found Brent Casteel for a five yard gain and then followed it up with a quick seven yard pass to Freddie Brown. But it was the next play, a 22-yard pass to Casteel, that made all 45,000-plus in attendance believe again. Just like that, Utah was on the cusp of another late-game rally.

After a pass interference call moved the ball to the 31, Johnson threw the ball away on the first play, connected with Bradon Godfrey for a five yard gain on the second and overshot Casteel on a long bomb down the sidelines on the third. The latter would have been a touchdown, sending the entire stadium into pure bedlam. Unfortunately, the pass was overthrown and now Utah, and the hopes of an undefeated season, faced a 4th down.

Kyle Whittingham could have taken a timeout but decided to put the game in the hands of Brian Johnson. It paid off and Johnson hit Brown for an 11-yard gain on the crucial fourth down play. Utah was back in business, closer to the goal and now with four new set of downs to work with.

Two plays later, Johnson again found Brown, this time for a touchdown, launching a frantic scene that was replayed a few minutes later when Robert Johnson intercepted Dalton's pass to seal the win. After downing the ball, everyone in that stadium exhaled and then began the chaotic celebration. The Utes were 10-0 for only the second time in school history and had now just defeated arguably their toughest test in clinching the school's second BCS berth. 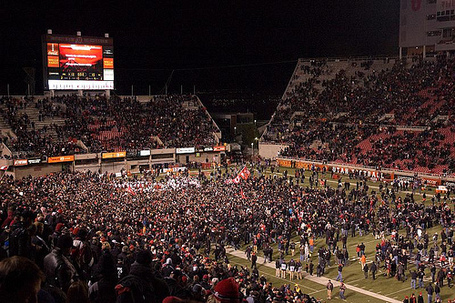 This marked the second time fans had stormed the field this season. The first came after another memorable last-minute drive by Brian Johnson. I don't think anyone could have expected a game to top that one in terms of excitement, but I think you can make the argument Thursday's battle with TCU did just that. It was an amazing effort by Utah and a wild finish that will be remembered for years to come.