On the front page of  Yahoo's college football page is an interesting article on Kyle Whittingham possibly leaving Utah. 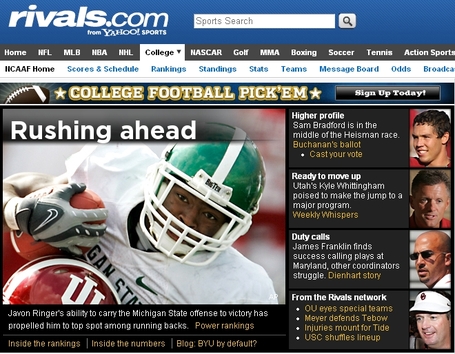 The article can be read here. I remember in 2004 there were a lot of stories about Urban Meyer leaving the Utes. We all expected it, but Whittingham feels different. He's tied to Utah more than any coach in Utah football history and you think that would factor into it. Of course, when you're dealing with money, things change.

But I think it would take the right offer for Whittingham to leave the Utes. It's not going to be for a program back east, so if a BCS conference team were to come calling, they'd most likely be from the Big 12 or Pac Ten and maybe the Big Ten. Which leaves only a handful of teams that realistically will be looking for a new coach next season.

In my opinion, they are:

Arizona - Mike Stoops needs seven wins if he's going to save his job. It's possible the Wildcats reach that mark, as they're already 3-1 and have all their toughest games at home.

Washington - I remember the morning I logged online and on my home browser page, Yahoo, saw Notre Dame had fired Ty Willingham. My heart dropped, because I knew their first candidate would be Urban Meyer. I was right, they came hard at Meyer, but he eventually went to Florida. Will Willingham play another role in a Utah coach leaving? Well the Huskies are almost certainly going to fire him, which leaves a West Coast vacancy and a program that could be very lucrative to Whittingham. But I don't think he would be their first option, with Chris Petersen probably leading the list and Bronco Mendenhall closely behind.

Oregon - Mike Bellotti might just decide to call it quits, or maybe the Ducks stumble again and finish with six or seven wins. It's possible with the injuries they have on offense and their schedule, which have them playing road games against USC, Arizona State, Cal and Oregon State. If Oregon drops them all, it's another 7-5 season, will fans in Eugene put up with that? If not, maybe Oregon decides to make some changes. If they do, Whittingham could be at the top of their list.

It's still pretty early and anything can happen, but it offers a different twist for this season.