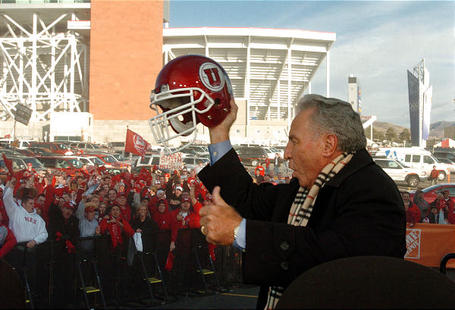 What to expect when Utah has the ball: I still think the Utes will stay fairly conservative in this one. Eddie Wide and Sausan Shakerin will need to step it up big time because I have a feeling Utah will look for ball control for much of the game. Jordan Wynn might be good, but he's still starting in only his second game (first on the road). That's going to be difficult to overcome, so I don't foresee Aaron Roderick calling too many aggressive plays that put Wynn in the position to make those rookie mistakes.

What to expect when TCU has the ball: They like to mix it up on offense, but I think the Frogs - like Utah - will stick to the ground. That isn't to say Andy Dalton won't throw, but the Utes' pass defense is one of the best in the nation.

How Utah wins: No turnovers, contain the Frog offense and hope the defense can force a few turnovers themselves. Even one interception or fumble could be the difference here.

Lucky G. O'Utes is ready for the biggest game of the year. He feels it. Do you?

Me mum back in Limerick makes a killer frog pie...just sayin'.

Let's hear what you think. Register for a free account here and leave your comments, predictions and other game day chatter below in the comment section. GO UTES! BEAT THE FROGS AND CRUSH THEIR DREAMS!