It's true - I don't know jack about San Diego State

Share All sharing options for: It's true - I don't know jack about San Diego State

I want to know. That isn't the problem. It's just that they haven't made enough noise this season to warrant me caring. They're not especially bad like New Mexico. They didn't start the season 3-0 and then collapse into a seven-game losing streak like CSU. They're not laughably and historically bad like UNLV and they're not quite on the cusp like Wyoming.

They are the quintessential mediocre team. The one no one really gives a damn about. And I'm not trying to disrespect their program, but it generally seems they've done just about as much as was expected and nothing more.

Which means I don't exactly know if I should be concerned about Saturday or indifferent to Utah's next opponent. But I'll concede that isn't entirely the Aztecs' fault. They just happen to be sandwiched between an extremely tough loss and the Holy War - not the type of game that revs up the excitement level. At least for me. Though maybe you're finding it a bit easier to get pumped for Saturday.

So, let's get to know these San Diego State Aztecs.

No. The Aztecs aren't good. They haven't been good or relevant in football since the Mountain West formed. It's the most head-scratchingly bad program in college football because it's freaking SAN DIEGO. 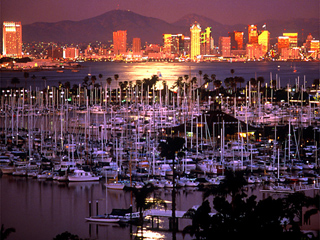 That's San Diego, folks. WHAT IS THERE NOT TO LOVE? Seriously! It's got beaches, women and it's a short drive to Mexico. Granted, we're talking about the scuzzy scary Mexico where people end up missing after a night of drinking and debauchery - surely sold into the drug trade for 50-cents worth of gum. But still. It's Mexico. Who hasn't wanted to venture off the beaten path? Especially if you're in college.

And that's what San Diego State is, right? A place for students to get educated. Plus, it isn't like it's that hard to get into, anyway. At least that's what the Simpsons tell me and God knows I get all my worldly knowledge from that show.

Lisa, you made this school even worse. And it wasn't exactly San Diego State to begin with

You know you've made it when The Simpsons actually mentions your school in an episode. I mean, who cares if it isn't entirely in good light. It's the freakin' Simpsons!

Of course, we're still trying to figure out why the Aztecs aren't very good. I'm not going to suggest they should be better this year than they are because they've gone under a complete overhaul with the firing of Chuck Long and the hiring of Brady Hoke. But you kind of get the feeling even Brady Hoke isn't going to turn that program into the winner most expect and again, those struggles might be the most baffling thing this side of realizing Sarah Palin can actually write.

What have they done this season?

Not much. In fact, there hasn't been one impressive victory yet. Sure, they've won four games - but look at who they've defeated: Southern Utah, New Mexico State, Colorado State and New Mexico. Not exactly Murderers' Row, right? I think the Hardy Boys faced tougher obstacles in their books than the Aztecs in every one of their four wins.

In each game that actually meant something - you know, like last week's showdown at home with Wyoming - they've lost. There was that 33-14 setback to a pretty bad UCLA team and a 34-20 blowout to Idaho (c'mon, I still can't take the Vandals seriously). They did give Air Force and BYU a scare, but that was earlier in the season when the games actually seemed fairly important. Since barely knocking off the 0-10 Lobos (haha, BYU almost lost to them), they were slaughtered by TCU (no comment there...we all know what that feels like) and then lost a must-win against the Cowboys (it isn't like Wyoming is all that great, either).

That means their best win might be their 34-17 victory over the 3-7 New Mexico State Aggies. When your best win is against a team that is the tops in its state only by default because the other decided to see how going winless would feel, you've got problems.

That isn't to say four wins isn't an improvement on last year's two. It is. But really, are they that much better? Baby steps, I guess.

Can they beat the Utes?

I guess it's possible. Last week proved anything was possible with how close New Mexico came to knocking off BYU (haha) before they reverted to their pathetic selves in the final minute and pissed the game away. But I guess the better question should be: will they beat the Utes and I think that's easily answered with a NO.

That's not me being cocky, I mean hell, I was pretty humbled after having the audacity to suggest Utah could give TCU a game (foolish me), but yeesh! It's San Diego State! This team is done. They've emotionally checked out. Yeah, they might have a mathematical possibility of receiving a bowl berth, but that's like saying the Utes aren't mathematically eliminated from the the conference title race. We all know, in the end, it just ain't going to happen.

If it was going to happen, they would've knocked off Wyoming last week for their fifth win and now they must win out and with their final two games coming on the road, it's likely they finish the year 4-8. Though I guess you could give them their final game (it comes against the equally bad Rebels, who, like SDSU, has sucked since the Mountain West's inception). But even that might be a bit generous.

Ultimately, after writing this article, I still don't have a clue who the Aztecs are. I mean, I know them. But I don't know them. You feel me?

Whoever they are, let's just hope it's not a team capable of pulling off a stunner this weekend. I don't know what I'd due if the Utes failed to beat a team that owns zero wins over any program sniffing .500 football.