Share All sharing options for: I really hate BYU

You'd think hate could be considered too strong of a word when describing a group of people I've never met and know little about. But you're wrong. I actually think it's not harsh enough. In fact, I'd like to tack on an f-bomb somewhere (probably after the really and before the hate) to signify just how much I hate those pricks (to quote the great Morgan Scalley).

Something about this week just brings out the worst in me. Maybe you can call me classless and emotional and pathetically ridiculous - but that's what makes this rivalry so great, right? Who the hell wants to immerse themselves in a damn kumbaya sing-a-long? This ain't Bible Camp, folks. This is college football - a sport driven by the primal need to HATE.

And I hate BYU. I hate them more than any team at any level in any sport and that's saying a lot.

I'm the type of Ute fan who cheers against the Cougars every single time they play. I don't feel guilty about it, either. I didn't want them to beat Oklahoma and I laughed my ass off when they were crushed by Florida State. That last game happened the week of Utah's loss to Oregon and I'll readily admit it took the sting out of that defeat.

You see, nothing beats watching those pompous blowhards hang their heads in shame after an embarrassing defeat. It's an image I will take delight in this Saturday when the Utes go down to Provo and pound their conceited asses into the ground. Especially if Bronco Mendenhall can shed a tear. Oh God, please let him cry.

Bronco is someone you can easily dislike because he's just so damn annoying. And it's not like he's the type of coach who fosters a love/hate relationship with the rival fan base. I don't love to hate him like I'm sure Georgia fans hate Urban Meyer. This is different. Bronco is just so creepy. Maybe it's the blonde hair that doesn't quite fit or the fact he looks like he was plucked right out of Madame Tussauds. Maybe it's the overbearing religious extremism. Whatever the reason - I just do not like the guy.

Which makes his facial expressions after a loss that much more enjoyable. He's got the face you can't help but love to see shattered in grief. I can't explain it, but there are a group of individuals you would pay top dollar to see cry and Bronco is easily one of them.

I mean, just look at this face! 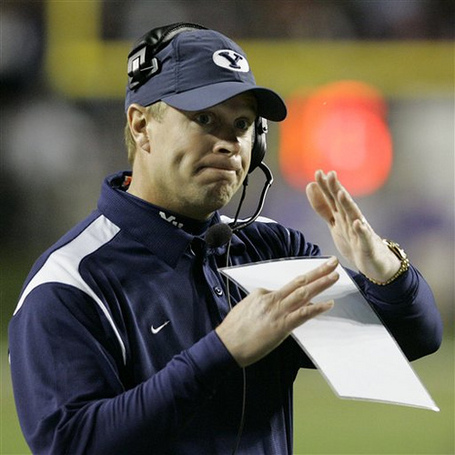 Tell me that just doesn't warm your heart.

Think Austin Collie's magic happens quote. This sums up BYU players perfectly because they truly believe they are morally better than their opponent. I get you're at a church school and I get there is a supposed honor code you're expected to live by - but who's fooling who? BYU players aren't any more holier than who they go up against. They're just good at keeping things quiet. At least some of the time.

But I think this plays into my problem with Bronco. Because he has created this perception the Cougars live better on and off the field than any other team in America. As if they're superior because football is fifth on their list instead of first.

Which is a joke because I don't believe for a second they invest less in winning than Utah or Utah State or Middle Tennessee State. It's just this fake imagery Bronco has created and it leads to their players acting like complete tools when they win a game in the final seconds.

Collie's comments aren't new and I'm sure you'll hear a variation of them this week from some other poor BYU soul that doesn't get it. I'm guessing there will be a litany of excuses following a Utah victory just like last year (remember, the Utes didn't win, BYU just turned the ball over more times than a victory would have allowed). But we're used to it. At least I am. It seems every time Utah does manage to knock off the Cougars, they're quick to point out this is our bowl game (except when we're actually playing for the BCS) and this is just another game on their schedule (except when their players are crying at the end).

What will the excuses be this year?

Cougar fans have proven to be some of the weirdest and most myopic fans in all of college football. They also have an innate ability to live in the past. They sound worse than my late grandfather retelling his countless World War II stories. Except those were more interesting and actually meant more than BYU's 1984 national championship that happened only a few months after I was born.

You know, there should be a rule in all of sports: If you weren't at least old enough to experience your team's last championship, you forfeit any right to talk about it. I'm guessing that would dramatically diminish the 1984 chatter that endlessly permeates out of Utah County.

But what gets me the most about their fans is the fact they're even worse than their head coach. You know you're on an entirely different level of douchebaggery when your douchebag coach calls you out for being too big of douchebags. That's like Pat Robertson telling you to take your religious fire and brimstone hate-speak down a notch.

Which is why BYU fans are the biggest reason I hate their program.

And this video pretty much sums up those fans:

Listen to what this idiot says because it embodies everything that is wrong with Cougar fans.

He mentions an arbitrary time frame to better inflate BYU's numbers in the rivalry. He calls Whittingham a traitor. And of course, he brings up conference championship smack. The only thing he didn't mention was the 1984 title and I'm sure he was scolded by the Cougar faithful because of it. 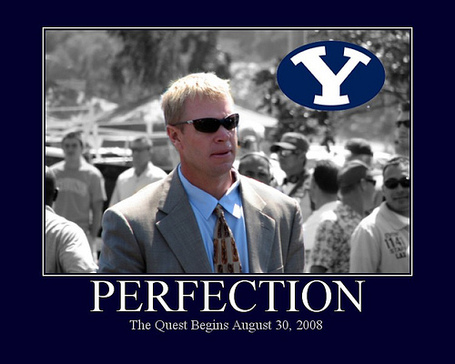 You're doing this Quest for Perfection thing wrong...

Well it's about time they wise up and realize it isn't 1989 anymore. Even if it means we have to drag them into the 21st Century kicking and screaming.

Until they do, I don't think many fans will like 'em. It's not just Utah fans, either. I'm sure Wyoming and Colorado State and Air Force fans are sick of this shtick as well.

Yeah. I hate BYU. Of course, when your fans look like this, it isn't hard to...right? 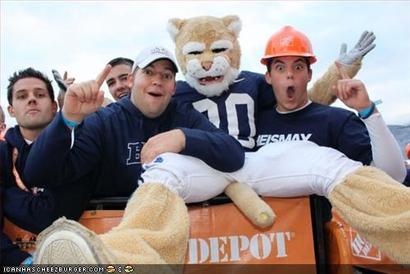