I'm sure many Ute fans hold a special place in their hearts for 2004 and 2008 because of how much was on the line. I can't deny those were exceptional and enjoyable games because of how thoroughly dominant Utah was. I am the type of fan who enjoys Utah thumping the hell out of BYU over winning in the closing seconds. Mostly because I can relax a bit and soak in the entire experience. That's something you might not be able to do when the game is on the line. Which has happened often in this rivalry recently.

In fact, outside of 2004 and 2008, there hasn't been one blowout this decade. Each game generally comes down to the final seconds and one or two plays ultimately decides the outcome. That was the case when Utah last tripped to Provo and I expect a similar scenario this time around (though with a Utah win, of course).

Those blowouts have been enjoyable because they're so rare and it's always nice to have blowout bragging rights to go along with victory bragging rights. BYU hasn't had that feeling since 1996 - a game they easily won over a depleted Utah team in Salt Lake City.

With that said, even though easy victories are better mentally for me, my favorite Holy War is probably one of the closest in the history of the series. It was also one of the hardest to sit through because of how the entire game played out.

My favorite Holy War happened when Utah shocked BYU in overtime back in 2005. 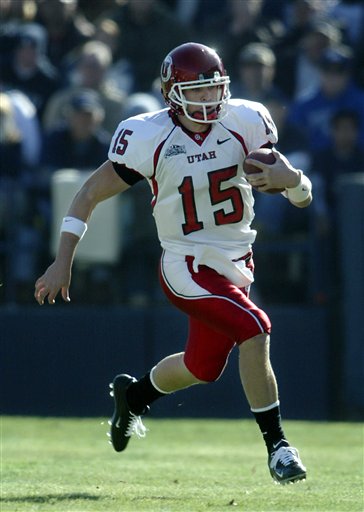 Brett Ratliff came up huge against BYU in 2005. Will Jordan Wynn do the same?

It's at the top because the Utes were given no chance to win. If you remember,  Brian Johnson and John Madsen went down against the Lobos the week before. Utah had lost statistically its best receiver and its quarterback prior to the biggest game of the season.

But it wasn't just the injuries or the fact they were such big underdogs that makes this game so memorable. It's memorable in my mind because Utah needed that win. They were 5-5 entering that game and a loss would have assured them of their first losing season since 2002. All that good created in the two years Urban Meyer had been coach was about to go up in smoke.

Of course, it didn't. The Utes raced to a big halftime lead and held off a huge BYU rally to win in overtime. The ending, which was nearly the exact opposite of the finish we saw a year later at Rice-Eccles Stadium, is still one of the best in rivalry history.

I was there. I remember the moments leading up to that final play like it was yesterday. When John Beck's pass fell incomplete - there was total bedlam. The whole Utah section erupted in cheers and hugs and it was hard to imagine a few hours prior not many thought a moment like that was possible.

But it was. The Utes left Provo with a huge win in the rivalry and nearly pulled off a similar stunner a year later. That didn't end the way any of us wanted, but the fact Utah was even in that game on the final play was just as remarkable as their win a year earlier.

This go around is different. BYU and Utah, like in 2007, are very similar teams. The Cougars are 9-2 with one blowout loss to TCU. The Utes are 9-2 with one blowout loss to TCU. This is probably the first time in a long time both teams have been so equal among each other. There aren't any significant injuries (unless you count Harvey Unga) like the last time they met in Provo (Brian Johnson wasn't 100%) and though a conference championship isn't on the line this time around, I'm expecting another game we're talking about years from now.

Hopefully we're doing it with a smile.