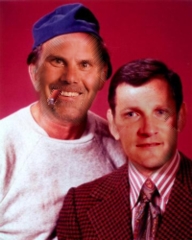 Okay, so maybe this sounds like the name of a failed TV sitcom, but with the changes on offense, I think it's an important discussion point.

Do you agree with the change? We talked about Whittingham's pulling Cain, but it seems this has gone a bit under the radar and it might actually prove to be the bigger decision made in the long run.

While I don't want to say Schramm failed at calling plays, I think we can all agree he struggled through much of his duties up in the box and it was a large part of why the Utes' offense had stagnated the last few weeks. Now I'm not going to put all the blame on him, but he does deserve some of it. However, did that warrant the type of change we saw Saturday and will Roderick be a better replacement?

From what I've read, Whittingham likes Schramm's intensity on the field and I'm sure that played a role - but let's be honest, it was made because the play calling just wasn't cutting it. Offensive coordinators can call plays from the sidelines and so if Whittingham were totally committed to Schramm as Utah's lone OC, I doubt he puts Roderick in the box to call the plays.

Now let's just hope it pays off. What do you think?