As we say goodbye to the 00s (or whatever we call this decade), I thought it'd be interesting to look back at the biggest and best games of the last ten years. It's without question this last decade has proven to be the greatest in Utah football history. We've seen unprecedented heights and a foundation set for what very well could become a true national program.

But it wasn't always that way. In fact, the Utes welcomed a new century by tanking the 2000 season - finishing an abysmal 4-7. It was a season that would eventually lead to the firing of long-time head coach Ron McBride. It also ushered in a new era that fortunately still has its grip on the Utah football program.

Though not entirely a great game with many memorable plays or lasting national memories, the 2003 Liberty Bowl was definitive for one reason - it allowed Utah to finish ranked for the first time in nearly ten years. That was important because had they not finished ranked that season, it's questionable whether they start 2004 ranked and if that never happens, then the Utes could have joined Marshall, Miami of Ohio and BYU as teams slighted by the Bowl Championship Series.

We know that didn't happen and a good amount of credit for that goes to the '03 Liberty Bowl. 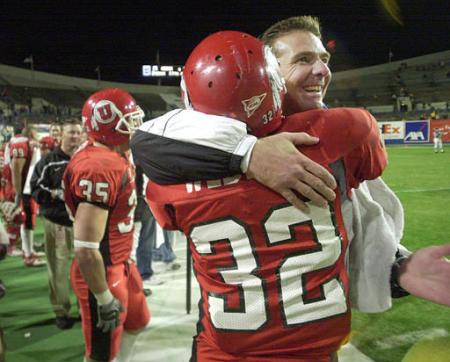 For starters, Utah wasn't expected to do anything in 2003. That was a transition year under new head coach Urban Meyer from the struggles seen in 2002. Not many people thought Utah would finish with a winning record, let alone contend - or win - the Mountain West.

Yet that's exactly what they did. They surprised the nation by surging to a 6-1 start and cracking the top-25 for the first time since the 1996 season. It was one of the fastest and most surprising starts in Utah history. And though there was a hiccup against New Mexico, the Utes - after the Lobos dropped a game to UNLV - controlled their own destiny when it came to winning that elusive outright title.

Obviously they did. And because of that ultimate prized victory, Utah was allowed to play the winner of the Conference USA in the Liberty Bowl. It was their first - and only - trip to Memphis and established the foundation for what would turn out to be the second best season in Utah football history.

Now as I mentioned, the Liberty Bowl wasn't an amazing game. There wasn't much offensive production or trickery that led to an awesome hook and lateral for either an important first down or touchdown. Instead, it was just a start-to-finish, blue collar beating. In many ways, it defined the 2003 season for the Utes - a team driven primarily by their defensive intensity.

That explains the halftime score - a 7-0 Utah lead. The margin failed to expand until the fourth quarter, when Utah eventually fully put away the Southern Miss. Golden Eagles. Of course, like their regular season finale in 2003, the defense played so well that, at times, the one-score lead felt much larger.

In the end, Utah won 17-0 and finished the 2003 season ranked 21st in both polls. Brandon Warfield, Utah's running back, had 91-yards and accounted for Utah's lone offensive touchdown. He was named the Liberty Bowl MVP for his effort.

Though their ranking wasn't as high as the 1994 squad, the 2003 Ute team had accomplished more than any to that point. And to quote Urban Meyer, "With all due respect to the '94 football team and Utah, and there have been some great teams at Utah, I think this will go down as the greatest senior class and one of the top football teams ever in the history of this program."

He was right. For a year, anyway.