Over the last eight trips to the postseason, the Utes have amassed one of the most incredible bowl records in recent football history. Some have been rather ho-hum wins (the 1999 Las Vegas Bowl comes to mind), while others helped define an era and a season.

For the 2005 Utes, there is little question the Emerald Bowl capped off a season that looked at its most dire and reestablished Utah's footing on the national stage - even if just a little.

You see, it was that season the Utes regressed greatly from their 2004 undefeated and BCS busting counterparts and then abruptly shifted courses to salvage what was turning out to be a horrific and catastrophic set of events that seriously jeopardized any goodwill Urban Meyer had created in his short two-year stint here.

Then the Holy War came (we'll get to that later on the list) and Utah's season changed dramatically. The Emerald Bowl worked as the exclamation point on what turned out to be a pretty memorable first year for Kyle Whittingham. 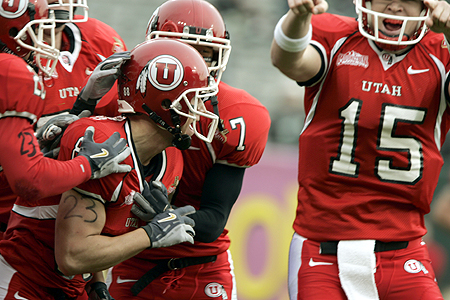 2005 wasn't supposed to be a season of struggle for Utah. They had burst onto the national stage a year earlier under Meyer and most pundits and fans felt they could easily keep it rolling - regardless of the vast changes the program saw between November of 2004 and August 2005. They were, in fact, picked to win their third consecutive Mountain West title and were discussed as potentially rolling through their schedule again undefeated.

At first glance, this didn't seem improbable because the schedule was rather watered down and the Mountain West at the time was still a struggling conference. The BYU Cougars and TCU Horned Frogs were both coming off losing campaigns and Colorado State had slowly fell from its perch atop the conference. The only team that looked capable of threatening the Utes for the conference crown was Wyoming and they had no history of success in the Mountain West - even though they were coming off a 7-5 season and a win over UCLA in the Las Vegas Bowl.

Then the season started and it became painfully obvious the preseason expectations all around were generally off. The Frogs stunned Oklahoma in Norman and the Utes found themselves struggling against a bad Arizona team in their opener.

Though they won, it eventually caught up to them in week three when they lost to TCU in overtime. It was Utah's first loss since their defeat to the Lobos in late-2003 and dropped the Utes out of conference title contention one game into Mountain West play.

After that, things went from bad to worse. There were losses to North Carolina and Colorado State - which were fairly difficult to accept, but not entirely disastrous. And then they dropped a game, at home, to San Diego State. It felt eerily like the Utes of the late-90s and hardly anything like what we had witnessed under Meyer.

The final nail in the coffin that year looked to be their loss to New Mexico in Salt Lake. They not only lost the contest - they lost their starting quarterback. Somehow, though, they bounced back and shocked BYU, regaining some momentum and grabbing a third consecutive bowl berth.

In that bowl game, the Utes were facing the Georgia Tech Yellow Jackets, who came into the contest ranked nationally. The Jackets' stingy defense added to their luster and because of their stature and Utah's less than stellar season, not many predicted a Utah victory.

However, from the start, the Utes dominated. Behind Brett Ratliff and Travis LaTendresse, Utah jumped out to a 13-0 lead and went on to win 38-10. LaTendresse, who had all but one of Utah's touchdowns, was named the player of the game as the Utes shredded what many thought was an impenetrable Georgia Tech defense.

It gave the Utes a fairly respectable 7-5 finish and provided one of the team's most memorable bowl victories.

Even though the season wasn't great and it was a far cry from their success a year prior, that bowl game might have actually been more enjoyable than the Fiesta Bowl played earlier that year. It was a victory earned and as Kyle Whittingham put it, "We had so many guys making plays today, it was unbelievable. Georgia Tech was a quality football team, and not only did we beat them, we dominated them."

No one expected that.