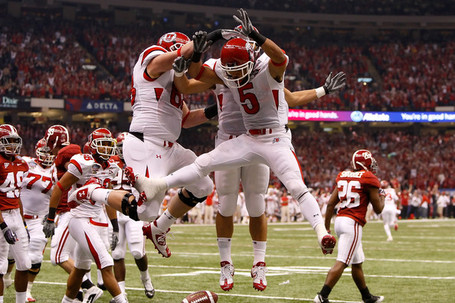 2009 could not have started better for the Utes. Two days after the new year began, Utah dominated their way to what many felt was an improbable win over the Alabama Crimson Tide in the Sugar Bowl. Alabama had spent a good portion of the season atop the polls at number one before finally succumbing to eventual champion Florida in the SEC title game.

That win turned the college football world upside down as more and more people began to doubt the BCS and its system of choosing a national champion. Even newly inaugurated President Obama brought up the fact the system needed to be overhauled, citing Utah's undefeated season as proof of this.

In the end, nothing changed. As the year progressed, the news stories about Utah and their impressive win slowly faded. People moved on to spring and then summer and then fall.

But as the football team quietly went into the offseason, Utah basketball seemingly returned a bit to its past glory. 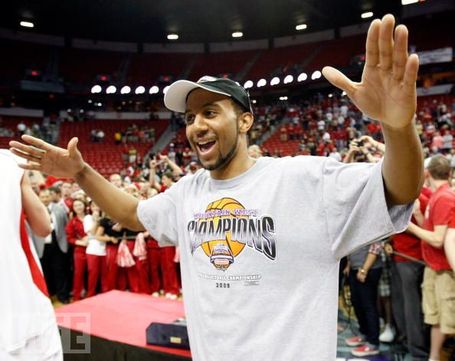 Not much was expected of the Runnin' Utes entering the 2008-2009 basketball season. They were picked to finish fourth by the media in the preseason Mountain West poll and after a rough start (they opened the season losing to D-II Southwest Baptist), Utah bounced back in ways no one thought possible. They rose to the top of the conference and stayed there through the months of January and February. By early March, the Utes had locked up a share of the Mountain West title and then surged to the conference tournament championship - securing a spot in the Big Dance for the first time since the 2005 season.

With their effort, Utah was rewarded with a five-seed and a match with the Arizona Wildcats in the first round. It was not a good game for the Utes. They struggled from nearly tip to buzzer and though they rallied in the final minutes, Arizona's athleticism and offense were just too much for a Utah team clearly outmatched.

Though the Utes were one and done in the NCAAs, it was still a successful season. Utah had once again won the Mountain West, managed to streak through the conference tournament and made a return to the NCAA Tournament. The future looked extremely bright for Boylen and Utah basketball. 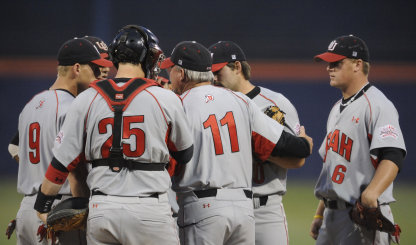 After basketball, no one expected anything from March to August, the start of football season. Utah had not fielded a successful baseball team in years and though there were glimpses of success throughout the season, they hardly did anything spectacular.

Then the Mountain West tournament rolled around and the Utes stunned BYU and TCU and then TCU again. Facing San Diego State in a must-win game to force a championship game, Utah shocked the Aztecs 4-1 and then did the improbable by winning the championship game 9-3. With the win, Utah was given an automatic bid to the NCAA Tournament for the first time since the 1960 season.

In the baseball postseason, the Utes did not just roll over. After opening the regional with a lopsided loss to Cal State Fullerton, they bounced back in a must-win against Georgia Southern and then surprised Gonzaga 9-7 to force their way into a championship game against the team that had beaten them earlier - Cal State Fullerton.

It was a game similar to their first as the Titans clobbered Utah 16-3. Though the Utes lost, they made their regional and had done something no one expected even after their miraculous win in the conference tournament. It was, without question, the greatest season in modern Utah baseball history. And though it's questionable if they will ever see that type of success again, for a few weeks in May, what they did was certainly magical. 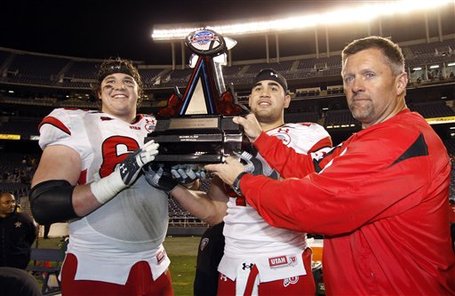 Of course, football would make its return after a long spring and summer hiatus. It was much anticipated as so much had changed since they last took the field in January. Not only had Utah lost Brian Johnson, who owned the most wins in Utah football history, Gary Andersen, their defensive coordinator, took off for Utah State and Andy Ludwig, the often turbulent offensive coordinator, departed for Kansas State and then found his way to Berkeley to coach at Cal.

Prior to the season, Utah was picked to finish third in the conference and received their highest preseason ranking in school history. The hype machine was already revving up as the team readied for their opener against their rival Utah State.

The game pitted Kyle Whittingham against his former assistant, but the bigger storyline surrounded Terrance Cain, who was chosen to replace Johnson as Utah's quarterback. Expectations for him and the entire team were pretty high and, for a week anyway, the Utes didn't really disappoint.

They had hardly any difficultly beating up on the hapless Aggies to kick off the 2009 season and it looked like they wouldn't miss much of a beat from last year's success - for a game anyway.

Then the team traveled to San Jose State for what many thought would be an easy victory against a struggling Spartans squad. It wasn't. They put up a mighty fight and pushed the Utes well into the fourth quarter before Utah eventually scored enough points to effectively breathe again. It was not a pretty win (something that would become a staple for Utah in '09) and it exposed Utah's offensive deficiencies - which would be on full display a week later.

Prior to the season, most Ute fans had circled the Oregon game as a chance for Utah to reemerge on the national stage. Boise State, TCU and even BYU (in the wake of their win over the Oklahoma Sooners) were dominating the news out west and the Utes were just there...humming along.

The Ducks, though, had struggled. They were pounded by the Broncos to start the season and barely held off a pretty questionable Purdue team a week later. Entering the Utes game, it seemed neither team had gained enough momentum to really position themselves as a clear favorite.

For Oregon, though, they found just enough and took advantage of Utah's struggles on the offensive end and their questionable run defense. For the Utes, it  was their first loss since BYU in 2007 and it all but ended any hope of crashing the BCS. It was an ugly loss that exposed much of what we had thought after the San Jose State game. It also ended Utah's nation-leading sixteen game win streak.

Utah would beat its next opponent, Louisville, but in the process lost their starting running back as Matt Asiata went down for the season. Replacing him was Eddie Wide II, who had no difficulty stepping into the role and stringing together a half-dozen or so 100-plus games.

The Utes put the Oregon loss behind them and rattled off a nice win streak, keeping up with TCU - who long before had established themselves the team to beat - atop the conference.

But, as was the case early in the season, Utah still could not figure out how to dominate an opponent. There were close wins over Colorado State on the road - where they had to put together a rather impressive comeback to even pull out the win; Air Force and then Wyoming.

The Wyoming game will probably prove to be the most important game behind Oregon, TCU and BYU of the regular season because at the half, with the Utes struggling on the offensive side, Kyle Whittingham decided to make a quarterback change. Though Terrance Cain was 6-1 as a starter, the offense had failed to live up to its hype and found itself often stagnated at long stretches in important games. With the hardest part of the schedule left to play, the coaches decided it was now or never for Jordan Wynn - a true freshman who had yet to even see any action under center.

So, at the half, Cain went out and Wynn came in. It sparked Utah's offense and the Utes went on to roll the Cowboys 22-10. A week later, they finally destroyed a team, ambushing the ineffective New Mexico Lobos 45-14.

That set up their big showdown with Texas Christian. The Frogs had steamrolled just about everyone in their path and entered the Utah game undefeated and seeking revenge from last year's meltdown in Salt Lake. Utah was heavy underdogs and as the game progressed - it became evident why. TCU smothered the Utah offense and picked apart the defense, rolling up more points than any team has done against the Utes in over a decade.

The game was never in doubt after the first quarter. The Utes lost 28-55 and blew any chance of repeating as Mountain West champions.

But the season was not lost. The Utes still had a chance to finish strong and more importantly, they had a chance to provide Wynn the experience he would need for next year.

A week after their thumping in Fort Worth, Utah bounced back nicely against San Diego State - who needed a win to keep their slim bowl hopes alive. Then came BYU. The Holy War.

Like Utah, BYU had lost most their hard games. They were embarrassed by Florida State and TCU and fell well short of expectations. Like Utah, a win over their rival would salvage a fairly uneventful season. So, for both squads, the Holy War turned out to be more about pride than conference titles and BCS berths.

The game would play out just like every Holy War we've seen outside of 2004 and 2008. The Utes jumped out to an early 6-0 and then watched as the Cougars rolled through the second and third quarters. Down big late in the game, Utah finally found the offense needed to score a touchdown and wiggled their way back into it. Huge defensive stops once again provided the Utes a chance to win late, however, they settled for the field goal and sent the game into overtime.

There, with the ball first, Utah could not continue their offensive success of the fourth quarter and once again had to settle for the field goal. It provided the Cougars, who had struggled at doing anything for the last part of the game, a new opportunity. And after blowing those chances in the fourth, they capitalized and scored the game-winning touchdown. It was a painful loss for the Utes and nearly sunk their season because, up until the Poinsettia Bowl, Utah had failed to beat anyone of significance in 2009.

But it was that Poinsettia Bowl against the California Golden Bears that made up, at least in part, for those losses to Oregon and TCU and BYU. It continued Utah's bowl win streak, gave them ten-wins and guaranteed them a top-25 finish.

It was also a very good year for Utah athletics as a whole. Now let's hope 2010 is just as good - if not better.