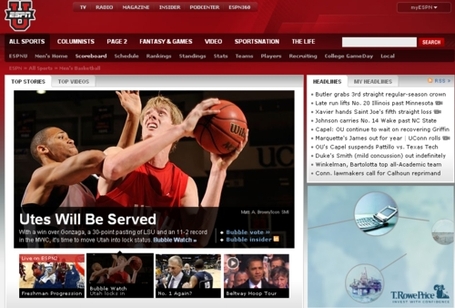 ESPN seems to think so and I'm willing to agree, unless Utah has a last second meltdown to end the season. Of course, now it's about seeding and a win Saturday in Provo, well that would be huge at setting up a solid seed.

But the Utes needed a victory over UNLV to get to this position and that is exactly what happened. Though the second half was a bit sketchy at times, all around, Utah dominated the Rebels and cruised to their 20th victory of the year.

Luke Nevill once again bolstered his MWC Player of the Year status by scoring 19 points and pulling down 13 rebounds. Shaun Green added 12 points and the Utes shot 50% from the field on the night, while holding UNLV to only 34% shooting.

Utah's win over the Rebels puts them a victory away from at least claiming a share of the conference championship. However, that could prove to be problematic with two huge road games against BYU & New Mexico looming. Lose both and it'll come down to what should be an easy victory at home against TCU, but I think most Ute fans would like to wrap up the title, even shared, a bit earlier than that.

So now focus turns to the Cougars, who enter the game with an impressive win over San Diego State Tuesday night. They're still fighting for a conference crown and tournament berth, so Saturday's game is huge for them, as well. Especially in the payback department, since Utah handed them one of their four conference losses last month.

Great victory for Utah, but now comes the biggest road game of the year. The Utes still haven't managed a huge road win this season and what better place to get one than Provo? Exactly.