I'm sure you've all heard by now. Unfortunately, I've been out all night, so I didn't get a chance to throw this up sooner.

Didn't watch the game, heard the final seconds on the radio and couldn't understand what the hell was going on.

In fact, let me set the picture...

I had a wedding reception tonight, which started around six, so I only caught the first 30 or so minutes of the game. Since my car stereo was jacked late last year and I haven't had the money to get a new one (and my lame-ass insurance won't pay for it), I was essentially tuned out of the game from the point I drove from my house to my girlfriend's.

Once we got into her car to head to the wedding reception, it was the half, so I didn't hear much of anything.

Thankfully, I had an outside man who kept me updated on the score and we ducked out of the reception just as the final minute rolled around and I got to listen to the final seconds in the car.

Unfortunately, sometimes the radio can become inaudible when something emotional happens. So all I heard was...

I didn't know what the hell had happened until maybe a minute or two after the game had ended.

But all I knew was that the Utes had won and that, ultimately, was all that mattered.

Now I'm happy...except for the fact I didn't actually get to see the victory, or the celebration.

Oh how I wish I could have seen the celebration.

But this at least helps a bit... 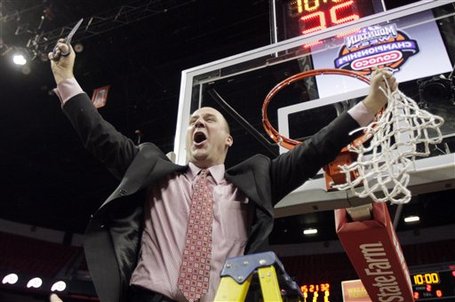 And now the Utes can say something New Mexico & BYU can't...they're both regular season and tournament champions!