Obama assures his Utah pick not a diss

Share All sharing options for: Obama assures his Utah pick not a diss

Remember that election thing we had last year? You know, between Barack Obama and John McCain? Well unless you've been living under a rock, you probably know McCain's home state is Arizona. Home to Utah's first round opponent, the Arizona Wildcats.

Well today on ESPN, Pres. Obama released his bracket and sure enough, he had the Utes beating John McCain's Wildcats. A diss? Well Andy Katz couldn't help but ask the President just that.

But it was the selection of Utah over Arizona - not an upset at all - that made Katz wonder if there was a McCain thing going on."It has nothing to do with McCain," Obama said. "I think Arizona is a great state. I love playing golf there, but they just squeaked in based on reputation."

For those wondering, Obama has Utah losing to Wake Forest in the second round, while North Carolina wins it all. We know he's wrong, though, because Utah is totally going to destroy Arizona, then Wake, then stun Louisville, shock Michigan State and roll to the Final Four for the first time in eleven years. Book it. 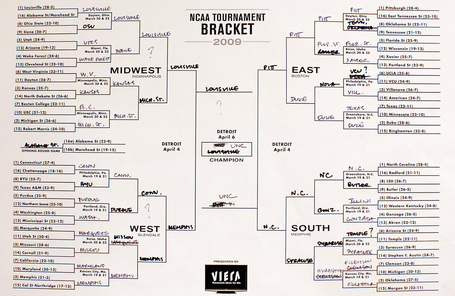 Notice he chose the UTES and not Utah?