Share All sharing options for: Whittingham's gamble and the 2005 Utah Utes season

This is part one of a four-part series where I will go over the first four seasons of Kyle Whittingham's career at Utah. It should provide insight into how the Utes got to where they were last year, but also offer a glimpse of what to expect for years to come. 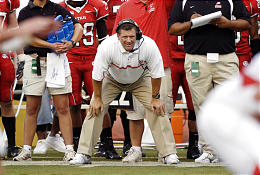 The Kyle Whittingham story with the Utes begins long before 2005, however, it only became far greater and more important to Utah football in the winter of 2004.

It was November 30th of that year and Notre Dame had just fired head coach Tyrone Willingham. Conventional wisdom suggested that Urban Meyer -- who coached Utah for two seasons -- would be at the top of the Irish's list. Sure enough, shortly after the firing of Willingham, Notre Dame made their intentions known and began the quest to woo Meyer to South Bend.

Notre Dame flew to Salt Lake, met with the Meyer family and appeared to be on the verge of signing the coach when he abruptly spurned them for the job at Florida. The move shocked not only Notre Dame fans, but Florida fans and, probably the least, Utah fans. Those in Salt Lake had already conceded they were going to lose Meyer, so even the decision to pick the Gators over the Irish didn't mean much, except that now Utah had officially lost their coach.

Whittingham, who had been apart of Utah football for a decade, became the clear front-runner for the job. However, it was unclear if Utah was the front-runner for his services, since BYU had also fired their head coach.

So began probably the most difficult moment in Whittingham's coaching career. No one knew if he would choose the family favorite Utes over the school he had attended and coached and loved for probably a good portion of his early life.

For a week after Meyer unofficially left Utah for Florida, Whittingham wrestled with the decision and on December 7th, he had finally made up his mind. Though no one knew, the feeling was that Kyle Whittingham would become the next head coach of the BYU Cougars. This belief was pushed closer to reality when on the night of December 7th, Whittingham drove down to Provo and then the Deseret News reported he would accept their job offer.

But something happened in the early hours of December 8th. Even though the news had leaked he was now the head coach of BYU, there was no official word from Whittingham, his family, or either school. Then the Salt Lake Tribune, in contradiction to the Deseret News, reported that he would be staying at Utah.

It wasn't until players at the U confirmed the story that it finally became official and later that day, the University of Utah announced Kyle Whittingham had accepted their offer, shunning his alma mater.

Make no mistake about it, Whittingham's decision was a gamble. It was a gamble because it meant he had to replace the coach with the greatest success in Utah football history. And though Meyer had only been at Utah for two years, he left some mighty big shoes to fill. For Whittingham, though, that was a challenge he was willing to take.

Yet that challenge would prove to be far more difficult than I think anyone could have ever imagined. As after the Fiesta Bowl, Whittingham had to watch as most of his offense was gutted by graduation and early draft entries. The upcoming season would prove to be a rebuilding one.

The new-look Utes took the field on September 2nd, 2005 to a packed house and live national television audience thanks to ESPN. They faced the upstart Arizona Wildcats, whose coach -- Mike Stoops -- was, like Whittingham, trying to find his own identity.

After a shaky start, which saw neither team come out all that impressive, Utah took a 10-3 lead into the half and appeared to blow the game open in the third when Eric Weddle intercepted an Arizona pass and returned back for a touchdown. After the extra point, the Utes had opened a 27-10 lead and looked as if they were going to run away with the game in the second half. That didn't happen.

Utah would fail to score again and Arizona slowly chipped away at the Utes' lead. At the end of the fourth, the Wildcats found the end zone, closed the lead to ten and stole all the momentum away from Utah.

After a quick three and out to start the fourth, Arizona again marched down field and scored, putting the Utes' lead at a dangerous three points. Utah's next drive fell apart, which fit the situation, as the exact same was happening to Whittingham's team in his first game as a head coach. Another punt put the Wildcats' offense back on the field and it became clear the Utes needed a stop.

They got that stop, though were aided by a questionable punt call from Stoops. That allowed Utah to run some clock and eventually the Utes secured their victory with an interception from Casey Evans. Kyle Whittingham, in his first game leading the Utes, was victorious.

A week later, he'd run his record to 2-0 with a rather average victory over Utah State. It wasn't until week three, and a game against TCU, where the Utes would face their toughest test of the season.

The Frogs had stunned Oklahoma in the first week of the season and quickly became that year's BCS darlings. However, they followed that huge victory with an even bigger loss to crosstown rival Southern Methodist.

Though TCU's BCS dreams were shot, Utah was still undefeated and riding an 18-game winning streak. This was a very big game, if only because it was the first conference game and TCU had built a reputation for being a pretty good football program.

The game matched its hype and though Utah took a 10-point lead in the third quarter, it was not their night. The Frogs roared back, pushed the game to overtime and eventually won there, snapping the longest win streak in Utah football history.

With only three games under their belt, the season felt lost for many, if not only because it meant an uphill climb to a third straight Mountain West title.

And if the mood was less optimistic after TCU, it became near-suicidal four weeks later when the Utes lost 28-19 to San Diego State. It marked the low point of Whittingham's seven game career at Utah and left many fans wondering what was going on to their football program.

It's hard to pinpoint exactly what went wrong during that three game stretch between October 1st and 15th, but it seems probable that it just was the perfect storm. An extremely difficult loss to Colorado State only three weeks later devastated the team, its morale and the fans. Utah would hit that bottom, as mentioned, a week later against San Diego State and their response would prove to be one of the defining moments of Kyle Whittingham's first season.

A week later, Utah bounced back and defeated UNLV down in Vegas. It wasn't a great win and it certainly didn't make things perfect again, but it was a start. The Utes' record was 4-4 and they were still in contention for a bowl game.

They inched even closer to that goal with a blowout victory over the Cowboys two weeks later in Salt Lake. The Utes easily won that game and it seemed as if the ship had been righted, even though a week later, it would again nearly sink. That happened against New Mexico and it marked the biggest development of the season.

With the game on the line and the seconds ticking away, Brian Johnson was in the midst of leading the Utes on a comeback. They had blown a lead against the Lobos and were in dire need of a score. As they crossed the 50-yardline and advanced deeper into New Mexico territory, the game -- and season -- took a disastrous turn.

Johnson injured his knee on that final drive and was lost for the season (and 2006, but we'll get to that later). That left the game in Brett Ratliff's hands. He stepped in, grabbed a first down and then threw an interception. With that, Utah fell to 5-5 and with only one game -- against rival BYU on the road -- remaining, they seemed doomed to a losing campaign.

But, as it would be common in subsequent years, Kyle Whittingham ralied the troops. Utah walked into Provo with a quarterback that had not started at the D-1 level and stunned the Cougars in overtime. Just like that, the season was saved. The Utes were assured of a bowl berth, their fourth straight victory over BYU and most importantly, they would not finish with a losing record.

The follow up to that game was even more impressive, as Utah shocked a ranked Georgia Tech team in the Emerald Bowl. It was a game never in doubt and a victory that proved Whittingham just might be getting the hang of this coaching thing.

Whittingham's first season ended with a winning record, a victory over BYU and a bowl win. That wasn't what many had hoped for at the start of the season, but something every fan gladly took at the end.

What we do know about 2005, even though we may not have known it then, is that Whittingham did an extremely good job keeping the team together even though everything was crumbling around them. The losses to TCU and then North Carolina and Colorado State and San Diego State could have ended their season, but it didn't. The loss of Brian Johnson could have been the end, but it was only a beginning.

There were mistakes and games that probably should not have been lost, but ultimately, in the bigger picture, we now know that much of this had to do with a very inexperienced team being led by an inexperienced head coach. That is never a good combination, yet Utah still managed to overcome that and while 2005 will never be regarded as an exceptional season, it offered two exceptional games. One we didn't expect to happen and the other -- given all those problems -- shouldn't have happened.