This is part two of a four-part series discussing Kyle Whittingham's short career here at Utah. Over the summer, I am going to look at the ups and downs and just how he built a foundation that led to the great 2008 season. Part one can be read here. 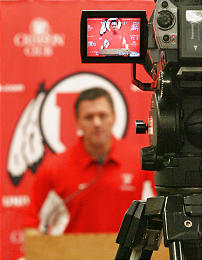 Kyle Whittingham surely didn't expect it to be this difficult. 2005 was supposed to be the transition year. The year where Utah football took a step back before reemerging on the national stage. That reemergence was set to happen in 2006, but it never came.

Utah entered the 2006 season with high expectations. A few sports publications even had them returning to the BCS after a one-year absence. With Brett Ratliff under center -- a quarterback who had stepped in for the injured Brian Johnson during the second to last game of the 2005 season -- the future certainly appeared to be bright. But that optimism would ultimately last for only one half.

In the first game of the season, one many fans thought could be a springboard to 2004-type success, the Utes opened up against the UCLA Bruins in Pasadena. Those thoughts quickly vanished, however, once the second half of a relatively close game began. The Bruins took a narrow halftime lead and ran away from the Utes, eventually winning 31-10. It was an embarrassing defeat for Utah and one not without controversy.

That controversy began after Brett Ratliff had thrown a touchdown pass in the second quarter to tie the game. On their next possession, late in the first half, Tommy Grady was inserted for Ratliff and promptly threw an interception, which was returned for a touchdown. All the momentum gained by Utah's last scoring drive was lost right before the half and the Bruins never looked back.

It was this moment that began a mini-mutiny among Utah fans toward the coaching staff. It was only the beginning, however, of a season that would provide far more difficulty than success.

With their BCS dreams dashed by week one, the Utes looked ahead toward the conference schedule and a way to rebuild their ravaged season. After three fairly mundane victories over Northern Arizona, Utah State and San Diego State, things looked to be back on track for Utah. They held a 3-1 record and had outscored their opponents 131-14 in their last three games. Maybe UCLA was just that good, or perhaps the loss was nothing more than a fluke. Whatever the reason, the Utes would face their toughest test of the season a week after their dominant 38-7 victory over the Aztecs. It was a game many expected would answer lingering questions and doubts.

Leading up to the season, fans had circled Utah's game with Boise State as the biggest of 2006. The Broncos, who had established an amazing record over the years prior, were predicted to battle Utah for a BCS berth. Though they were under new management , as Chris Petersen had replaced Dan Hawkins after he left for Colorado, they were still Boise State.

This game was supposed to be the official return of Utah football. Sure, it didn't happen a few weeks prior against UCLA, but that was only prolonging the inevitable. Or so Ute fans thought. That Saturday, which was extremely warm and sunny, the Utes failed to live up to any of the pre-game hype. Instead, they were laughed off the field, their field, by a team no one much respected. It was, at that point, the most devastating loss for Kyle Whittingham. The final score, which was extremely lopsided, didn't even begin to tell the story. In fact, that 36-3 loss was far worse than the score suggested. The Utes were done by halftime and the fans who actually stayed during the second half had to watch as Bronco fans took over their stadium.

Boise State would go on to do what the Utes had accomplished in 2004, but it didn't take the sting out of that loss. If the UCLA game provided seeds of doubt, it was Boise State that ultimately grew those seeds into a foreboding tree. Was Whittingham in over his head and was there any hope of salvaging the 2006 season?

Those questions would hang over the Utah season for the remainder of the year. And each time it appeared they were making progress, as they did later the next week with a surprise victory over TCU, it was met with even more regression. There was a 31-15 loss to Wyoming and a blown halftime lead-turned-loss to New Mexico a week later. Even victories over UNLV, Colorado State and Air Force didn't remove the bitter taste of many of those losses.

Ironically, though, it was a loss that would eventually help save Utah's season. In fact, possibly the hardest loss in Utah football history.

As the Utes entered the 2006 Holy War, fresh off four-straight victories over the Cougars, no one gave them a chance. BYU was on the verge of wrapping up an outright conference title, had nine-wins and were ranked for the first time since the 2002 season. It was a familiar scene for the Utes, though, as a year prior they were written off as well.

But this felt different. BYU was much better and was led by John Beck -- who had done a complete 180 mentally from where he was a year prior. The Utes were essentially in college football limbo, as they weren't entirely bad, but not very good, either. This made fans hope for the best, but really expect the worse.

It's difficult recapping that contest because so much could have happened. It was a game where the Utes were two-seconds away from victory. An upset that would have been for the ages and undoubtedly would have saved the 2006 season entirely. Though it didn't come and the way that game ended is still extremely hard for many fans to swallow even today, it provided hope. The Utes were left for dead prior to their game against UNLV and once again, they had bounced back to finish the season with a winning record. Sure, 7-5 was not exactly all that impressive and they did lose to BYU for the first time since the 2002 season, but they had heart. Heart in sports is everything because if you're beaten and battered, it might be the only thing left to get you through. Far too often teams lacking heart give up. They wilt and give in and fail to finish. But not Whittingham's Boys. As they had done the year before, Utah rebounded and finished what could have been a catastrophic season and made it a mild success.

The Utes went on to win the Fort Worth Bowl, defeating Tulsa and finished the season with an 8-5 record. Like the year before, it was not the most desirable result, but it could have been so much worse. And now that we have a chance to look back at this, years after, maybe it should have been.

Utah wasn't all that good in 2006. It wasn't because of coaching, but the fact they were still trying to stock up on talent post-Urban Meyer. There were also issues, specifically on offense, that resulted in their near-downfall. The most glaring was at running back, where Utah struggled to find a suitable replacement for Quinton Ganther. The lack of a ground game doomed them in their losses and put that much more pressure on Ratliff to do something he obviously wasn't capable of doing.

Even though 2006 began with high hopes, it was all too premature and frankly, impractical. That season proved to be just another brick in Whittingham's rebuilding effort and though it didn't seem like it at the time, what they did positioned them for an amazing run just two years later.