Next week brings us the official launch of NCAA Football 2010. This is pretty big, since Brian Johnson will be on the cover of the PS3 version of the game.

It also is probably going to feed your football addiction until the season starts later this summer.

To wet your appetite, here is some in-game footage involving the Holy War.

For those purchasing the game, Play N Trade here in Salt Lake is having a special release party involving none other than Brian Johnson. He'll be on hand July 14th to sign copies of the game and play a few rounds with some lucky fans. 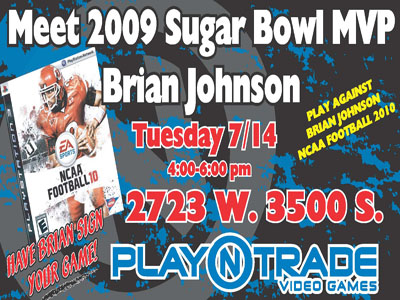