Share All sharing options for: Remember when Utah football was just decent enough?

I'm not that old, so I don't pretend to remember the painful era of the 70s and 80s for Utah football. But I do remember the ups and downs of the 1990s and early 21st Century.

Those were some good times for Ute fans, but hardly great. Outside of 1994, things were either just decent enough, or not good at all. Sure, Utah found itself competitive against their rival BYU, but it was only a marginal step up from where they had been a decade earlier.

Which makes what Utah has accomplished the last five years pretty damn amazing and even that more enjoyable.

For every Ute fan, this is what we've always wanted. We always dreamed about being the it team in football. We wanted BYU living in our shadows, not the other way around. And prior to 2003, many of us never really imagined that happening.

Then in walked Urban Meyer and everything seemed to change over night. In his first season, Utah rivaled its best season ever. In his second, they outright claimed the best season in school history. Four years later and that title has once again been reclaimed.

A decade ago, did anyone think this possible?

The first college football game I ever owned was Bill Walsh College Football for the SNES. It was released in 1994 and only had a handful of teams and none went by their college names. Unfortunately, it did not include the Utes. There was no Salt Lake or Utah team and to make matters worse, they had included BYU (Provo).

That was difficult to digest for all of us Ute fans. Imagine playing NCAA Football 2010 with only BYU representing the Mountain West. Yeah, exactly. 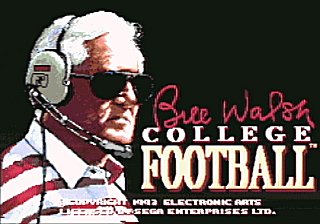 I hadn't been a video game fan, outside of a few N64 games, during this early era and the next college football game I purchased was NCAA College Football 2K2 for the Sega Dreamcast. The Utes were horrible in this game, especially in team prestige, if I recall. I remember often trying to build Utah into a power and I was fairly successful at that, but in the back of mind wondered if that would ever become a reality.

Well it did. Amazingly, two seasons later, the Utes were undefeated and playing in a BCS bowl. Four years later and they were doing it again. Who knows what the next four years will mean for Utah football, but in a decade and a half, the Utes went from not even being mentioned in a video game to having one of their players grace the cover.

For a Ute fan growing up on Bill Walsh football and wishing he could just once play with his favorite team, I think that's pretty awesome.