I was watching the Georgia-Tech/Clemson game last night and I really liked the configuration of the Jackets' stadium. The way they have the students stretching beyond just the sidelines and toward the end zone really created a far greater atmosphere than what you get with a traditional student section located solely on the sides of a stadium - the current setup for the Utes.

With discussion of expanding Rice-Eccles Stadium hitting a fever pitch this summer, I think it'd be cool if they did something similar to what Georgia Tech has done. We all know the south end zone will be enclosed, connecting to each side of the east/west stands, so how about growing the student section a bit over with the new potential expanded area?

This is what the stadium looked last night during their game against Clemson. 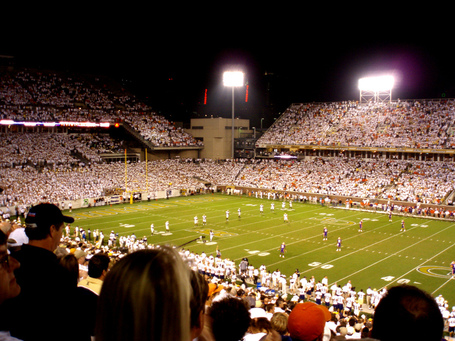 If they do expand the south end zone to look similar to the north end zone, do you see them growing the student section to that area, as well? I think it'd be a good idea - especially since once the stadium is enclosed, the sound is trapped at that end and makes it far more intimidating.

Utah football: Talamaivao happy to be back on the field - Salt Lake Tribune