Share All sharing options for: Six years ago...did you attend? 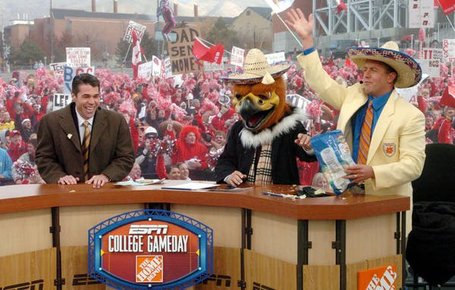 In 2004, ESPN GameDay made its first trip to the state of Utah and went live from the south-west corner of Rice-Eccles Stadium's parking lot. It was only the second fourth time a non-BCS team hosted the event (the first was Air Force) and after a six year hiatus, the program is back.

This time it's a bit different. They're not here solely for the Utes. In 2004, they were. BYU was only an afterthought to Utah's potential busting of the BCS. That was the news story they were following and pretty much everyone who attended that morning and the game later in the evening expected the Utes to win.

But it's still going to be an awesome event.

Did you attend 2004's GameDay? I was there bright and early in my sombrero.

I'll be there again Saturday morning, minus the sombrero, of course.

After the jump, the 2004 segment where Chris, Kirk and Lee picked the Utes!