Football tease day one, a Wynning attitude and some roster changes

Share All sharing options for: Football tease day one, a Wynning attitude and some roster changes

I love me some spring ball. Nothing like building expectations even higher through practice that, more than likely, will only prove to be a small foundation toward greatness this season. But it's something and at this point, that's all I care about.

What's new at this camp is Brian Johnson. The former player is now Utah's quarterback coach and he wasn't shy about jumping right into the quarterback battle between Jordan Wynn and Terrance Cain. Wynn is expected to be Utah's starter and began spring as the number one quarterback. But of course, Cain started eight games last year and only lost one, so he certainly has the goods to push Jordan.

There were some quotes from Johnson in today's Deseret News:

We've got a competitive group that's experienced and has played some football for us," said first-year quarterbacks coach Brian Johnson. "It's nice at that position when you have multiple guys that have won games for us. We're fortunate to have that."

The Utes, he added, are also fortunate to have a player like redshirt freshman Griff Robles around to head the quarterback run game.

"I'm really excited about the group that we have," said Johnson, who quarterbacked Utah past Alabama in the Sugar Bowl in January of 2009. "I'm definitely looking forward to working with those guys."

Expectations will be extremely high for Wynn and I think he'll handle them well. The way he led Utah back from a 14-0 hole in the Poinsettia Bowl shows me that, at least until proven otherwise, he has the tools to be something special.

With Johnson's leadership, this is probably going to be the most exciting battle to watch, even though we probably already know the outcome.

Beyond those two, Griff Robles is also challenging, though it seems unlikely he'll make the leap to starting quarterback. However, I found this quote by Whittingham interesting:

"What Griff brings to the table at this point and time — we're hoping — is the same thing that Corbin Louks brought to us in '08," Whittingham said.

I was hoping the coaches could utilize Cain more in a similar-style package (running the spread option), but maybe Robles has more promise doing something similar and it can't be any worse than what we saw last year with the Wildcat.

In other news, Victor Spikes has moved from safety to running backs. I can't really explain this because of how clogged the Utes are at that position, but I'm sure the coaches know more about this than I do.

So there you have it. Day one already in the books. You can find some photos (thanks to the DesNews) of practice after the jump. 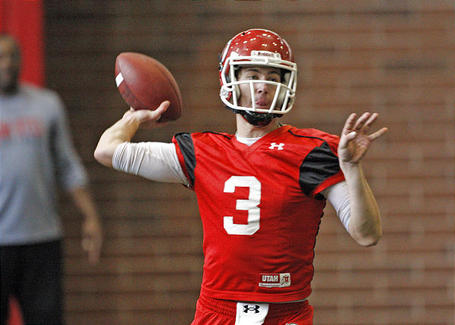 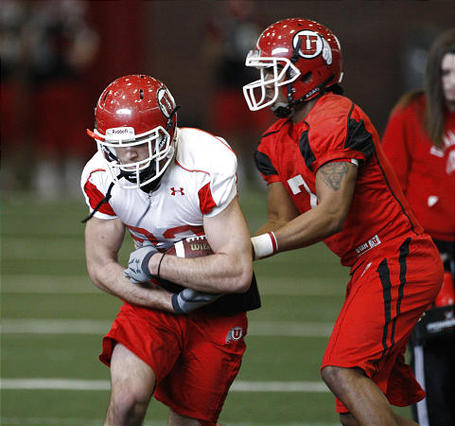 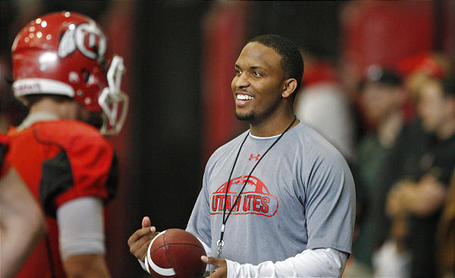 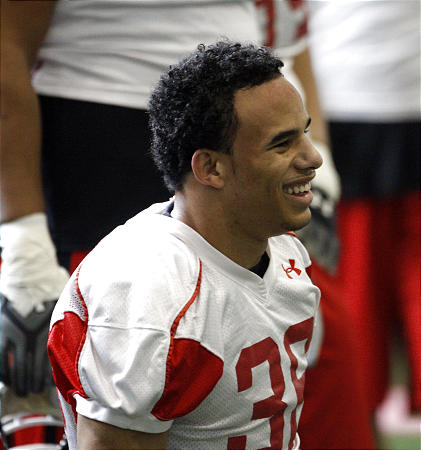