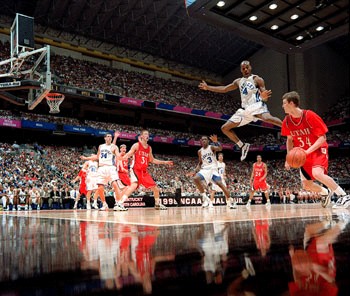 Now that the play-in voting is done, we'll move on to the first match-up. This should be pretty lopsided with how 1998 is often regarded as the best season in Utah basketball history.

That team managed to make the NCAA championship and held a double-digit lead at the half before relenting and losing to Kentucky in probably the most painful loss in program history. It's a loss I'm still not over and I could only make it through the first half of the game a few years ago before shutting it down.

2005, though, was a good year. Not much was expected out of Utah entering Ray Giacoletti's first season. They did return Andrew Bogut and Marc Jackson rejoined the team. However, they weren't anything special the year before (needing an improbable shot at the buzzer to advance to the NCAA Tournament) and it was supposed to be a transition year.

Except it wasn't. The Utes rolled to the best record in Mountain West history and grabbed the fifth seed in that year's tournament. They then went on to beat a quick UTEP team in the first round and surprised the Oklahoma Sooners in the second. It was the school's first Sweet Sixteen since the 1998 season.

Oddly enough, both these teams watched their season end against the Wildcats.