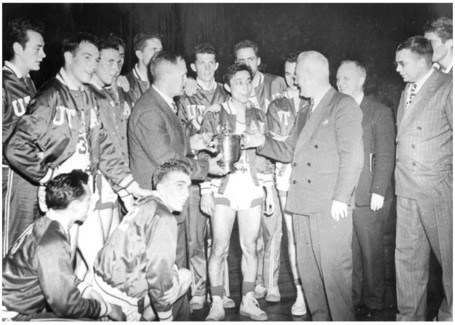 1944 proved to be an extremely good team. Their season set the bar as the only team out of the two-major sports to win a national championship.

That championship came in the middle of World War II and those Utes are thought to be the first true tournament Cinderella team. In fact, they weren't even supposed to be in the NCAA Tournament that year - opting to play in the NIT instead. They chose the NIT due to the fact it was played in New York, a place only Arnie Ferrin had visited.

After losing to, you guessed it, Kentucky, the Utes' postseason looked finished. Then there was an accident involving Arkansas' team, leaving a space open in that year's tournament. So Utah quickly accepted and began their improbable run.

It was improbable because they faced teams that were a hodgepodge of great talent from other programs. The war had gutted a great deal of rosters and those schools closer to military bases benefited the most. Like Dartmouth - who the Utes would eventually play in the national championship.

As underdogs, no one gave Utah a chance. But they stunned the Big Green and won the whole thing.

What is more improbable is that one of Utah's biggest role players, Wat Misaka, was a Japanese-American. This after the Japanese had bombed Pearl Harbor. Misaka's ethnicity did draw taunts at first, but it's said that after their stunning upset, Misaka quickly won over the New York crowd.

So did Utah. By the time they played St. John's, the winner of the NIT Tournament Utah was bounced from weeks earlier, the Madison Square Garden helped cheer on the Utes to a 43-36 victory.

1991, though, was far different. That was the first big season under head coach Rick Majerus. He had spent most of the 1990 campaign out due to heart surgery and his first full year gave Ute fans a glimpse of what was to come.

Utah produced its first 30-win season in program history, went 15-1 in WAC play and advanced to the Sweet Sixteen for the first time in eight years. There they eventually lost to UNLV, who made it to the national championship that season.

But it was a year that put Utah back on the basketball map after a near-decade of futility.

Can it stack up to the only championship in program history?