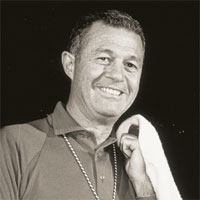 It's Gardner versus Gardner! Oh my.

These two teams aren't that much different. Both made the Final Four and both failed to win it.

1961 was the first to make the Final Four. Gardner had been the coach at Utah for eight seasons and had built a consistent winner in Salt Lake City. That season they finished first in the Skyline Conference with a 12-2 record and entered the tournament with a first-round bye.

After knocking off Loyola-California, they defeated Arizona State in the Elite Eight and then were thumped by Cincinnati in the Final Four. The Bearcats that year went on to win the whole thing and Utah lost to St. Joe's in the losers bracket, finishing fourth overall. Utah ultimately finished the regular season 11th nationally (fun fact, they were 8th nationally the year before entering the tournament, but lost in the Sweet Sixteen).

That marked the second to last season in the Skyline Conference. Utah would win the final Skyline championship in '62 and then along with a bulk of their rivals, moved to the Western Athletic Conference a year later.

That's where they struggled. In their first three years as a WAC member, the Utes failed to finish above .500 in conference play and missed out on the NCAA Tournament each year. Then 1966 came and the program returned to the national stage.

Finishing first in the conference, the Utes once again had a first-round bye before beating Pacific and advancing to the Elite Eight. There they met Oregon State and won a tight contest to return to the Final Four.

Of course, the Utes lost a close game to the Miners in that Final Four, keeping the program from claiming a championship. They would then fall to Duke by two in the third/fourth place game.

That was, until 1998, the last trip to the Final Four for the Utes. Gardner would not see that type of success again at Utah, as he failed to make the NCAA Tournament in his final five seasons.

Now which team is best?