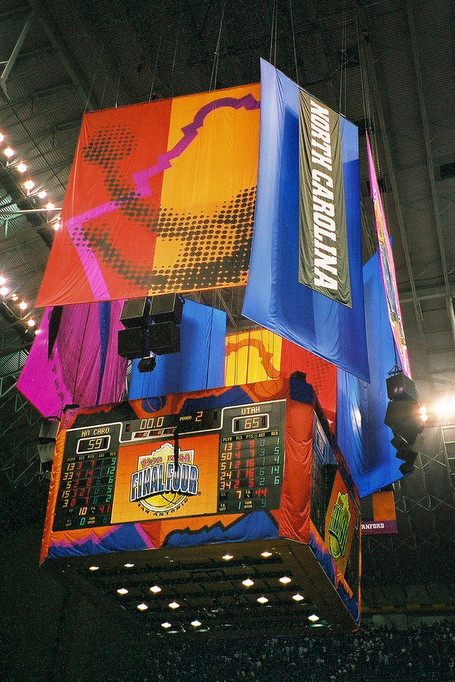 Butler, I sympathize. We've been there. It was twelve years ago. Back then, the Utes were the Cinderella story. The team that shouldn't be playing in the national championship. A program that no one expected to make it to the final game when the whole tournament started. Utah, coached by a quirky and balding fat man who lived in a hotel, though shocked the nation on its way to the improbable.

It began in the Elite Eight, where they faced the Arizona Wildcats. A team many thought would roll to their second consecutive national championship. It didn't happen. Utah buried them early and dominated the game, advancing to the Final Four for the first time in a generation.

The events that led up to that Final Four are a blur for me because I was still fairly young. I was attending Clayton Junior High at the time and truthfully, I didn't follow the first two rounds all that closely. I knew the Utes were good and expected them to at least make the Sweet Sixteen - but I'm not sure anyone thought they were capable of reaching the Final Four. Not a year after Keith Van Horn had left for the NBA. Not as a three-seed.

So I wasn't anticipating a very deep run. I expected that it would end most certainly at the hands of Arizona. It should have. This was a team that had won it all the year prior and were favored to at least make another title run. So the dismantling Utah put together was as much surprising as it was exhilarating. I remember the coverage of that win and the media frenzy that reminded me of the NBA Finals a year prior. It was something Ute fans had never really experienced because the program, though strong, was hardly a national power. They were good enough to make noise in the tournament, but outside of 1997, when everyone thought a Final Four run was possible, not much was expected of them on the national stage.

Yet here they were. A bunch of white kids with a black point guard from little known Utah playing on the biggest stage in college basketball. It was remarkable. When you're not a Duke or a Kansas or a Kentucky, it's not likely you'll experience a Final Four. But that's exactly what happened.

I think had it ended there, had Utah lost to North Carolina, every one of us would have felt satisfied with the season. Hell, it might not have hurt as badly as the loss to Kentucky in the championship eventually did.

That's the irony in it all because I was content with just being there. I didn't expect to go out and beat the overall number one seed to advance to the national championship. Programs like Utah just don't make it that far. Sometimes, rarely, you'll see one pull off that unlikely upset to get to that point. But, unfortunately, the clock always seems to strike midnight before getting any further.

Against the Tar Heels, that was expected because they were the favorites entering the tournament. They owned the overall number one seed and had a roster filled with NBA talent. The Utes, who were nothing more than a nice story, could not possibly match up with the more athletic Heels.

Or so they said.

But they did and they won, keeping the dream alive and advancing to the title game to face their old nemesis Kentucky.

Fitting, since the Wildcats had ended Utah's run in 1996 and 1997. For the media, this was setting up for the perfect underdog story.

This had Disney Movie written all over it. The Mighty Ducks on the hardwood. Even their coach was a character.

Here you had a school that produced a pretty good basketball team going up against the program with the most wins in college basketball history. An opponent that had, over the last two seasons, shattered their hopes and dreams. This was their revenge. This was that final few minutes in a movie where the Bad Guys appear to be winning and then the Good Guys snatch victory from the jaws of defeat. The triumphant music sounds. The coach and the delinquent hug as the crowd cheers and the other team, realizing they had been bested by the best, join in with the clapping.

The perfect ending. The Miracle at the Alamo.

I had confidence Utah would win. I'll readily admit I expected victory. They looked too good against Arizona and North Carolina. Kentucky? Not so much. They had struggled in close contests throughout the final two rounds prior to the championship game.

And it was just meant to be. There are moments where things simply feel like they've fallen into place for that one perfect culmination. Think the entire 2008 season for the football team. A season where one or two plays could have ultimately ended any chance of playing Alabama in the Sugar Bowl. Where a failed two-point conversion erases any hopes of an undefeated season. Where a dropped pass on fourth down with less than two minutes left is the difference between the Poinsettia Bowl and the BCS.

That season had it. When it ended, were we all that surprised the Utes, who had dangerously lived on the edge for almost all twelve of their games, crushed the Crimson Tide in the Sugar Bowl? Maybe a little. But in retrospect, it played perfectly into that season's context.

So, too, should have that 1998 national championship game. It was just too perfect for Utah not to win. The stars were aligned and victory almost ours.

That day when the Miracle at the Alamo was supposed to take place, I had class. I remember wearing a red Ute shirt to school. I wasn't the only one. Every kid, it seemed, wore red. I believe my art teacher actually gave us extra credit if we did wear Ute colors.

It was the talk of the halls. No one could think or concentrate because, unlike with the Jazz and the NBA Finals, this event was actually happening during the school year.

Then school let out and we all went on our nervous ways. I came home and anxiously paced around the house. I think I even went outside a bit to play some hoops with a neighbor kid. Anything, really, just to clear my mind and pass the time before The Biggest Game in Utah Basketball History.

Finally, around six-thirty, we gathered around the kitchen table to watch. Yes, the family generally watched television in the kitchen.

There was my grandma, who had always been a huge sports fan. My grandpa, a Utah State Aggie that also loved the Utes. My mom, who was not hugely into sports, but was just as emotionally invested as the rest of us, and then there was me.

Almost a year earlier, we had all gathered around that same table to watch John Stockton hit his game-winning shot in Houston to send the Jazz to the NBA Finals. We had hoped there would be a similar amount of celebration that night.

I remember the first half of that game as if it were played yesterday. I remember the introductions and the cursive signatures of each player as they were brought onto the court. I remember Utah starting so well and looking just as good as they did in the Elite Eight and the Final Four against Carolina. I remember the announcers pumping up what was looking like the improbable.

I remember at the half and how much praise there was for the Utes. I remember Dean Smith, who had retired a year earlier and joined the CBS crew, saying Kentucky was in trouble. I remember them showing the stat that no team in NCAA history had ever won a championship game after trailing by double-digits at the half.

Just as I had expected during the lead up to the game, the Miracle at the Alamo was unfolding. The unheralded underdogs were only a half away from claiming the first championship in the program's modern history. And they were doing it against the team that not only owned more wins than any program in basketball, but had been a huge thorn in Utah's side during their great run in the mid-to-late 90s.

All was right in the world. Those stars had aligned and everything felt right.

Then it happened. The lead, I believe, stretched to 12 after the first minute or two and then it slowly began to evaporate.

My heart sunk. It was a terrible feeling watching that little scoreboard in the corner of the television as Kentucky rallied. That's when I stood up and walked over to the wall and proceeded to bang my head against it every time the Wildcats scored. Not hard, mind you, but I did it for so long that it eventually gave me a headache - though that could have been from the game itself.

At the five-minute mark, I think it became clear Utah wasn't going to win the game. It was such a bad feeling. A horrible feeling. I felt sick and sad and emotionally exhausted.

I said earlier that I didn't think losing to North Carolina a game earlier would have hurt as badly. That's what sucks the most because when we think of 1998, the first thought that crosses the mind of every Ute fan is that they were one half away from winning the national championship.

Not a round. Not two rounds. But one half.

And they didn't get it done.

1998 was great and so terrible at the same time because even as I type this, I feel the emotion of that night. That sadness. That realization at the five-minute mark that there was not going to be a comeback. That it was over and that the Utes, who had led at the half, were done. A great season. The best season in school history. And yet it ended on such a bitter and crushing note.

A disappointment 12 years has not healed.

I'm guessing in another 12, we'll find it just as painful to think about as we do today.