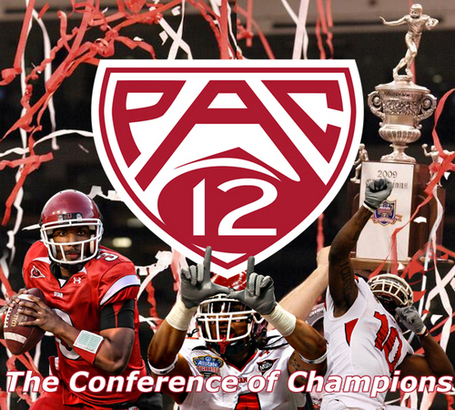 Credit to whomever did this...if you're out there, come forward!

I would like to start by saying thanks to those fans from Pac-10 teams who have come over and congratulated the Utes. This is an extraordinary moment for not just Utah athletics, but the entire state as a whole. This ranks up there with the Utah Jazz's two trips to the NBA Finals when it comes to magnitude.

For Ute fans, this is something we've been dreaming about for a long time. We just never believed it would happen.

Too many times we heard Utah's name mentioned as a potential candidate for Pac-10 expansion and every bit of speculation would pass without any substance. Over time, it became a joke among the most ardent Ute fans because it just did not feel believable. Utah to the Pac-10...will only happen when Pigs Fly.

Folks, this is now our moment as a program. We've proven beyond a doubt Utah has earned this bid. We didn't just luck into it. Let's be clear - Utah football of 1998 would not be in this position.

We're here because of what the team was able to do on the football field over the course of the last ten years. Sure, it took a lot to happen and maybe a bit of luck was in play. But the bottom line is that if there is one non-BCS team out there who has earned the chance to prove themselves in a BCS conference, it's Utah.

And now we have that chance. It's going to be fun to see what they do with it. But with how well this program has risen above expectations, I believe, no expect, excellence.