Getting to know the University of Utah

Share All sharing options for: Getting to know the University of Utah 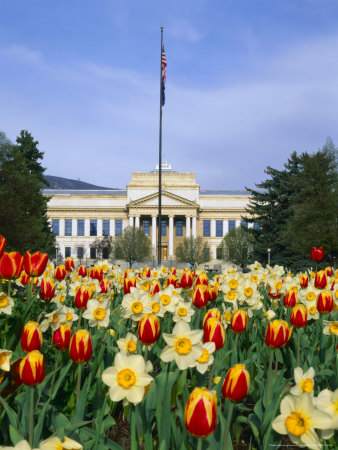 The Park Building at President's Circle

The U, as it's generally referred to locally, is located only two-miles east of downtown Salt Lake City. Its location, on the foothills of the Wasatch Mountains, offer amazing views of the Salt Lake Valley, downtown Salt Lake and the Great Salt Lake far-west of the city. 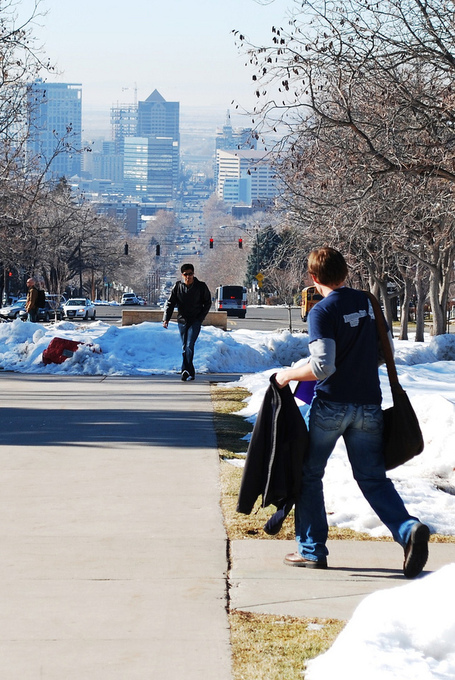 The campus is connected to downtown through Salt Lake City's light rail system. There are stops at the University's two largest venues - Rice-Eccles Stadium and the Huntsman Center, which is home to Utah's men's and women's basketball teams.

Light rail opened in the late 90s in preparation for the 2002 Winter Olympics. Rice-Eccles Stadium, which replaced Utah's former Rice Stadium in 1999, played host to the opening and closing ceremonies of those games. 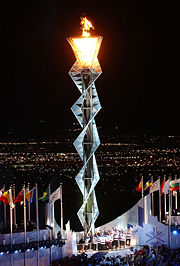 The University of Utah's football team is not the most storied program in college football and certainly doesn't have the history you see from a great deal of Pac-10 teams. However, especially recently, the Utes have made a name for themselves.

While we look at Utah's recent football history as evidence of their power, it's important to not ignore the 1990s. This was the era the Utes finally turned it around on the gridiron and actually became a player in the Western Athletic Conference.

Prior to their rise, Utah often stumbled badly throughout the 1970s and 80s, rarely winning enough games to find relevance in their own state. No coach, it seemed, could turn the program around. Until Ron McBride.

McBride had been an assistant coach at Utah in the 70s and fell in love with the area. After spending time as a positions coach with the Arizona Wildcats, he was offered the head job in 1989 and began reestablishing the Utes as a respectable program.

What McBride did here at Utah is hard to put into words because it was really a monumental accomplishment. You see, BYU dominated the state in every conceivable fashion. The 1980s were extremely good to that program and it all but dwarfed anything the Utes could ever hope to do on the football field.

So he was swimming up the stream to begin with. This was not a football market and Ute fans had conceded that. We were content with maybe contending with BYU every few years - but the football team was more a way to occupy ourselves from September to November when the Runnin' Utes began play.

McBride changed that. It wasn't easy and there were bumps in the road, but  by the early-90s, Utah had climbed from the hole they built in the 70s and 80s and were once again contending with the BYU Cougars.

In 1993, finally, the Utes won down in Provo for the first time in a half-generation. It was a huge step for a program that had been accustom to three and four win seasons.

A year later, Utah did what many thought unthinkable - they produced a near-great team.

Those Utes would finish 10-2 and in the top-ten for the first time in program history. Along the way, they beat the Pac-10 champion Oregon Ducks in Eugene and then knocked off Arizona in the Freedom Bowl. It was, up to that point, the greatest season in Utah football history.

Of course, that was supposed to be the turning point for the program. A year where the Utes established themselves as a legitimate player in the western region of college football. It didn't happen. Unfortunately, the Utes could never attain that type of success again under McBride. In 2002, after a 5-6 season, the University made the decision to fire the coach who owned the second most wins in program history.

It was a very emotional move and it was very divisive because a great deal of fans and media personalities believed the Utes could never do better than what Ron McBride had done here. We were told we had to be content with 7 or 8 wins and knocking off the Cougars every two out of three years.

But for other Ute fans, we knew the program had potential. So much talent was going to the NFL under McBride and yet it failed to add up to what we were seeing on the football field post-1994. Steve Smith, a fantastic receiver in the NFL, did not come close to producing as well as he did with the Carolina Panthers here in Salt Lake City.

For many, the frustration of a stagnant offense and wasted talent eventually led to McBride's dismissal. And though the community was critical of the firing, it was probably just as important for the program as his hire was in the first place.

That's because Urban Meyer, now the great coach of the Florida Gators, replaced McBride and put Utah football on the map.

Meyer was a fantastic get for Chris Hill and the Utah football team. He had done just enough to catch the eye of the University, yet was still unknown by a great deal of bigger programs.

But Meyer knew Utah had the potential. This is why he took the job and he was right. He took a team that had finished with a losing record and won the Mountain West outright in his first year. No coach at Utah had ever done anything remotely that good so early into his career.

He followed that up, of course, with the BCS busting 2004 season that eventually put the Utes on the national map.

It's a spot they haven't relinquished since, even though Meyer has long left for the SEC. 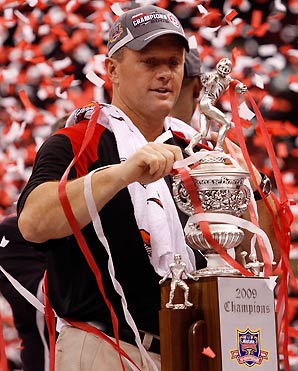 His replacement, Kyle Whittingham, has proven to be a true Utah Man. Which is odd because Whittingham played for, and graduated from, BYU.

Yes, our head coach was a member of our bitter rival.

But that's okay, because he's exorcised those Cougar demons long ago.

When Meyer left for Florida, the Cougars down in Provo were just fresh off firing their former head coach, Gary Crowton (Oregon fans will remember him as their offensive coordinator a few years ago). BYU made no attempt to hide their want of Coach Whitt.

So Coach was faced with a difficult decision. Stay at Utah, his home for a decade, or return to his original home.

We know how that turned out. In a dramatic, last-second move, Whitt picked the Utes and the rest is history.

That history includes the 2008, 13-0 campaign where Utah stomped the hell out of the Alabama Crimson Tide in the Sugar Bowl. They would finish second that year and I think most Ute fans believe had a legitimate claim to the national championship.

Last year, Cal and Oregon fans saw firsthand what Utah is capable of doing. The Ducks faired better, defeating the Utes in a very wild, down to the final seconds slugfest earlier that season. The Bears, though, lost in the Poinsettia Bowl.

The year before that, Oregon State provided Utah fans with one of the most memorable games in program history.

Sorry Beaver fans, had to do it

For me, as a Ute fan, it's amazing to have watched this program grow. My first game was back in 1993. It was against Idaho. I was pretty young. Utah lost.

That shows you just how far this program has come and really, it's been a fairly quick rise.

Even a decade ago, all the way back in 2000, the Utes weren't realistically a BCS contender.

But now they're in a BCS conference.

In a bit over ten years, we've seen a new stadium, three head coaches and two of the greatest seasons anyone could ever imagine.

The topper was today. 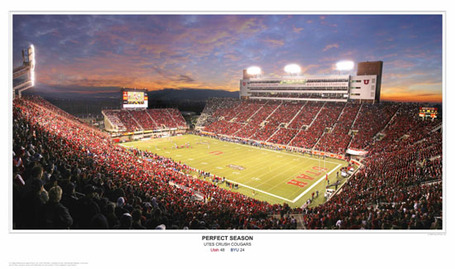 Later, I'll show you our basketball team. Which, unfortunately, is down at the moment. But its history is still pretty awesome.