Though it does not appear to be a requirement for Pac-10 affiliation, it hasn't stopped Utah from addressing the potential of expansion. In fact, Chris Hill is on the record saying expansion is coming.

Currently, Rice-Eccles Stadium seats about 45,000 fans. That would make it one of the smallest stadiums in the Pac-10. With expansion to 60,000+, the Utes would leap toward the top-half of the conference in that regard.

It's unknown when expansion will happen. However, the stadium was built with the possibility of it down the line if such a requirement was needed. It appears, at the pinnacle of football here at Utah, that moment is now.

Of course, it'll be a few years before anything is done. Hell, we haven't even been in the Pac-10 a week. So they'll have to decide where to expand and how big to make it.

What we do know is that the next logical expansion point for Rice-Eccles Stadium is the south end zone. That was built in the 1980s and the only real link to the old Rice Stadium.

This would fully enclose the stadium.

With that said, we don't know the plans for this phase. So I thought it'd be interesting to look at two potential south end zone expansion possibilities. 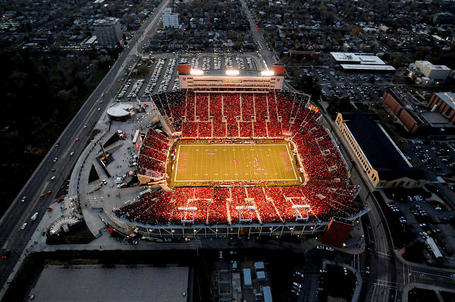 The first is a smaller plan. This would make the south end zone a near-replica of the north end zone. This, in my estimate, would probably sit roughly 15,000-20,000 fans. That would up the capacity anywhere from 60 to 65,000 fans.

The next scenario isn't dramatically different. However, it would connect the SEZ with the highest point of the west stands. I'd wager this would up the total number by 20,000-25,000. So the potential numbers here for the entire capacity would be around 70,000 fans.

It's possible they decide to expand with the potential of future expansion down the line. I do not believe, though, the initial expansion would up capacity to 70,000. So it's unlikely this scenario is what we see in the coming years.

With that said, the first one is probably a very realistic look at what RES would look like with the SEZ enclosed.

As of now, though, I think we could settle on 65,000 and a stadium similar to scenario one.