The fore(four)fathers of Utah football

Share All sharing options for: The fore(four)fathers of Utah football

As we move on to the Pac-10 next season, I think it's important to recognize the four men who made this move possible. Without them, Utah football wouldn't even be relevant on the national stage, let alone good enough to warrant being accepted into the most prestigious athletic conference in America.

They are, without question, the forefathers of our program. They built it and have kept it running for two-plus decades now. Thanks to that vision and leadership, Utah has gone from one of the worst programs in the western United States to one of the best.

How'd we get here?

Hill dramatically changed college athletics at the University of Utah when he arrived in the late 80s. His role as athletic director made him directly responsible for the changes the program needed to become a contender in the old Western Athletic Conference.

To understand the magnitude of what Hill has done at the U, you've got to understand what he was facing when he took over the program in the 1980s. Utah football was horrendous. No, worse than horrendous. It was a disaster. The program constantly failed in every regard and what's worse, they watched their bitter rival explode on to the national scene.

The 70s and 80s were harsh for Ute fans. Really harsh. In that twenty-year span, the best season was probably 1982. The Wayne Howard-led Utes managed an 8-2-1 record. Not entirely bad - but so far under the national radar that they couldn't even sniff a bowl bid. Back in the 80s, unless you were a team from the best of the best conferences, you had to produce a mighty fine season to even have a hope of postseason play. 8-2-1 wouldn't cut it. Especially when, in the last game of the season, the Utes lost to BYU 56-28. Maybe not as bad as a year before when they fell 56-6 to the Cougars in Salt Lake City, but pretty damn bad.

That's how ugly it was. From 1972 to 1992, BYU won 19 of 21 meetings. Most games weren't close. The gap between the two programs had grown wider than at any time in the Holy War's history. To add insult to injury, in 1984, the Cougars won a national championship. The same year Utah managed a 6-5-1 season - which, for Ute fans, was something of a success considering what they had done prior to that.

This was the mess facing Chris Hill when he took over the athletic department. There wasn't even a hint of potential success in the football program. Even the stadium, which had been built in the 1920s, was woefully outdated and considered a joke for a Division 1 program. Long-time head coach Ron McBride once said it was the last place he'd take a recruit on their visit to the university.

Rice Stadium was a hole. It was a wooden hole that sat roughly 32,000 and we were lucky to get close to that on gameday. 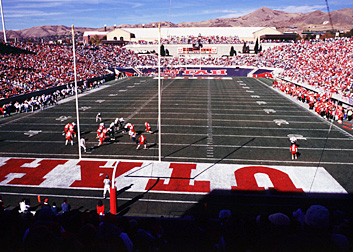 Beyond the sliver creating wooden mess, the Utes hadn't been to a bowl game since the 1964 season. The program's future was just as bleak as its present.

Then that changed. Shortly after Hill took over at the athletic department, he fired Jim Fassel and hired Ron McBride. That move proved to be the game-changer Utah football was looking for, as the program would never be the same.

That was just the first move. Hill also formed the Crimson Club, made the pitch for a new stadium and was the man who brought Urban Meyer from Bowling Green. His impact on Utah football is probably greater than anyone because without these moves, the program is certainly slumbering through its 80s-like stupor.

The coach who started it all. I don't have to rehash what McBride faced at Utah. I've gone over that here and in this post from last week.

But he made Utah football. He made it relevant again. He made it so they weren't just another easy win on anyone's schedule. Most importantly, though, he made the Holy War competitive again.

I mentioned the 19 or 21 wins BYU saw throughout the 1970s and 80s. Well that run ended in 1993. That's when Utah managed to win in Provo for the first time in a generation. It was a huge victory because it set the tone for years to come. Since that victory, Utah has won ten of the last seventeen meetings. It's not a comparable swing seen a decade or so earlier, but it radically altered the Holy War and put BYU on notice that their days of dominating not only Utah - but most its opponents - were over.

1994 was the highlight of McBride's career. That year, the Utes went 10-2 and managed to finish in the top-ten. But what McBride did for Utah football goes well beyond just 1994. He established a competitive team that finally, after years of futility, returned to the bowl scene.

By McBride's fifth season here, he had already guided the Utes to one more bowl than all Utah coaches had done previously in program history.

He would end his career second in wins and coached the Utes to two conference championships (1995 and 1999). His teams also played in six bowl games (going 3-3) and beat BYU six times.

That success built the foundation for Urban Meyer, who'd come in and take Utah to unprecedented heights.

Utah football was consistently good, but never ever great in the 90s under McBride. It had really plateaued a bit in 1995 and eventually, by 2000, began to crack. After two losing seasons in three campaigns, Chris Hill made the difficult decision to fire McBride and replace him with Urban Meyer.

It was believed Utah had the talent thanks to McBride to go beyond just being relatively good. Unfortunately, it didn't appear he was capable of being the one to take Utah to the next level.

Right away, Meyer saw success at Utah. His 2003 team wasn't supposed to do much - but they came roaring out of the gates and pulled off some surprising wins against Oregon, Cal, Colorado State and Air Force. It vaulted them into the top-25 and set the course for a conference winning season.

Utah would finish its inaugural year under Meyer at 10-2, five wins more than their 2002 counterparts.

But it was all about 2004. This is the season that put Utah football on the map. Not only did they run the table, they did so in spectacular fashion. None of their games were close. They had a mix of offensive firepower and a stingy defense. It proved to be the best season in non-BCS history, as the Utes became the first team from outside the BCS to claim a spot in a BCS bowl.

Utah would go on to hand Pittsburgh an extremely lopsided loss in the Fiesta Bowl. Urban Meyer then departed for Florida and Hill was once again faced with the prospects of replacing a head coach.

Unlike twice before, Hill's replacing of a coach came on the heels of success, rather than failure. This was uncharted territory for the athletic department because it wasn't necessarily about creating success, rather about sustaining it. One bad hire could set the program back five or even ten years and Hill knew this.

The odds on favorite to get the job was the man many wanted to replace McBride three years prior - Kyle Whittingham. He was the defensive coordinator under both McBride and Meyer and had endeared himself to the Ute community.

Of course, he was also a Cougar. He had grown up a Cougar and played for the Cougars. His Cougars were also searching for a head coach - as they had just fired Gary Crowton.

Whittingham had a tough choice on his hands. Continue what McBride and Meyer built, knowing the expectations were far higher than down in Provo, or return home and coach the team he grew up around. It was not an easy decision, but Whittingham eventually chose the Utes.

It was a very important hire for continuity sake and down the line, proved to be the right move.

Sure, Whittingham had his growing pains and there were questions about his leadership, but he rose above it and sustained what Meyer had built at Utah in two short years.

2008 was a repeat of 2004 and proved to the nation, and even Ute fans, that Utah football wasn't solely an Urban Meyer creation.

Yes, these four men made this Pac-10 invite possible. All played vital roles in making Utah football what it is today. Their approaches were different and their level of success varied, but without any of 'em, it's unlikely the Utes are in the position they find themselves today.

Chris Hill, Ron McBride, Urban Meyer and Kyle Whittingham are the forefathers of Utah football. They are the reason we are in the Pac-10 and every Ute fan owes them a debt of gratitude for all they've done.