What Chow's hire means to the future of Utah football

Share All sharing options for: What Chow's hire means to the future of Utah football 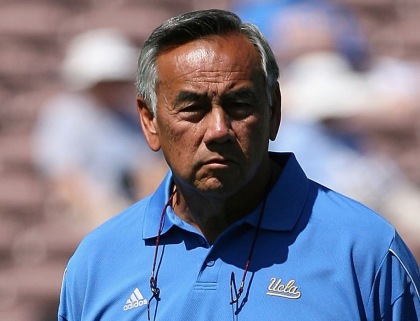 That great offensive mind is now in Salt Lake City and ready to fix what has become a broken Utah offense.

But the story here might be bigger than just Chow's ability to turn around Utah's slumping offense. This hire is actually an impressive one on many fronts.

1) Chow's biggest asset as a coach is his experience - specifically his experience in the Pac-10. There will be growing pains. Utah has not consistently played at the BCS level and that change is going to impact the program, its players and yes, even its coaches - including Kyle Whittingham.

Whittingham now can lean more on Chow's experience to help ease the program through some of its inevitable growing pains.

2) Utah's offense the last two seasons has lacked an identity. I think much of this is due to the inexperience of both Dave Schramm and Aaron Roderick. Neither could really produce a sustainable offense over the past two years and because of that, a change needed to be made. With Chow, you bring in instant credibility - but more importantly, a coach who has proven over the course of a long career that he does have an identity.

Chow might not be at the level he was in the 00s when he led the Trojan offense to the top of college football and that's fine - I don't think many Ute fans expect that type of success. However, Chow's experience and leadership should help establish a solid foundation for this offense and that's something that hasn't really been there since Urban Meyer left for Gainsville in 2004.

3) More importantly, though, this move shows that Utah is not playing around. They very well could have casually entered the Pac-12 and surveyed the landscape after a few seasons. Instead, Coach Whittingham decided they wanted to win right out of the gate.

This move, along with the hiring of Tim Davis, betters the program immensely as we ready for the biggest move in the history of Utah athletics.

The Utes are now playing in the big leagues and it appears they're ready for that new endeavor.

Now the story some would like you to hear is that Chow is overrated and over the hill. They could be right. Chow hasn't really tasted success since leaving SC in 2004 for the Tennessee Titans. That's a concern. We aren't getting a sure-thing like maybe North Carolina State was getting when Chow abruptly left BYU in 1999.

Of course, the UCLA Bruins program appears to be in the dire straits and that certainly played a role in his lack of success there. Their issues are far greater than poor play calling and poor offensive coaching.

That won't be an issue at Utah. The program here is far more successful and stable than the one he just left. So I expect Chow to see more success with the Utes than he did with the Bruins. He might not turn Jordan Wynn into a Heisman winner and there might not be a national championship down the pike - but he will make this team better.

As we move into the Pac-12, Utah has proven it's not going to sit contently by with just their invitation to the BCS. They're ready to play like a BCS program.