Remember how the main villain in Terminator 2: Judgment Day just could not be killed? You could shoot him, blow him up, do just about anything to him and he'd still morph back into his high-tech, unstoppable self and continue on tickin' as if nothing had happened.

That's Oregon this year. LaMichael James injured? No biggie. They'll get by. Darron Thomas knocked out of the game? So what? They'll just regenerate into a still constant, powerful force.

It's like no matter what you throw at Oregon, how many shotgun blasts to the chest they take, you can't stop them. Arizona State tried, knocking out Thomas midway through their loss to the Ducks Saturday night and it did not slow them down one bit.

That's some voodoo right there. 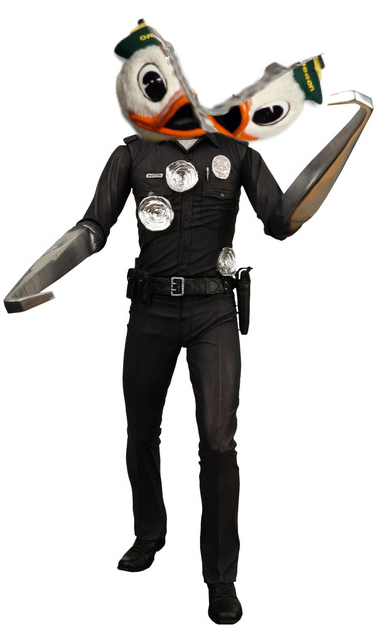 HOLY SHIT, I THINK IT JUST WALKED THROUGH PRISON BARS!

Team of the Week: Oregon. Even without their star running back and quarterback, they still had no problem cruising to a victory over ASU. You know, this might not be voodoo, it could be witchcraft.

Team of the Weak: Oregon State. Oh Beavers. I really believed in you. But damn, you had to go crap the bed against BYU. That's unforgivable. Sorry.

1. Stanford Cardinal (6-0): It was sketchy there for a bit, but then the Cardinal rolled like I thought they would. They'll have to play better if they're going to beat the other Washington team this Saturday, though.

2. Oregon Ducks (5-1): Riding a high and nursing injuries, the Ducks find themselves in a tough trap game this Sat...ah hell, no one's buying that one, right?

3. Washington Huskies (5-1): I guess we'll get to see if the Huskies are for real. They certainly have the offense to do some damage against Stanford - but will it be enough?

4. Washington St. Cougars (3-3): Tough loss Saturday, but they made it a game at the half and that was better than what some were predicting. Can't lose to the Beavers Saturday or, well, it's hard to imagine bowl eligibility.

5. California Golden Bears (3-3): Ugly defeat to USC has the Golden Bears teetering. Can they salvage their season with a win against the Utes Saturday? They might have no choice.

6. Oregon St. Beavers (1-5): Well dammit, Beavers. Just when it looked like you were going to crawl out of the cellar, you lose your grip and tumble back down to the bottom. Tough break.

1. Arizona St. Sun Devils (5-2): They're still runnin' away with the division, but it's clear they're here mostly because the Pac-12 South just isn't very good.

3. UCLA Bruins (3-3): Had a nice bye week. Now they travel to a place that has been a house of horrors for the Bruins lately - they've lost three straight to Arizona in Tucson. Worse? They haven't defeated the Wildcats since 2006.

4. Utah Utes (3-3): Hey, the Utes won! Woohoo! Now let's see if they can finally get that Pac-12 win. If not, maybe they should apply for membership to the Big East (they're 9-0 all-time against that conference).

5. Colorado Buffaloes (1-6): First Stanford, then Washington and now Oregon? What'd Jon Embree do to piss off the scheduling gods?

6. Arizona Wildcats (1-5): A new era begins tonight. And by new era, I mean a placeholder until Arizona begins begging coaching prospects to take over a struggling program at a basketball school in a small market in a state that also is home to ASU football.

Game of the Week: Washington @ Stanford. This is really the first test for the Huskies since their meltdown at Nebraska. For their sake, I hope this game goes much better.