Share All sharing options for: The Dennis Erickson Drinking Game

If there is one thing Dennis Erickson knows, it's drinking. If he ain't coachin' football, he's at the local Tempe watering hole slammin' back a few Pappy Van Winkles.

So it was only a matter of time before he threw his support behind a drinking game. It might not be Milton Bradley, but it's got a certain drunken charm.

You know, he reminds me of a man that lived at the top of the street I grew up on as a kid. He was a drunk who drove this silver pickup truck and would look out his window yelling at all the school kids as they returned home from school. He was always skunked and his words would slur to the point that every offensive swear barely made sense.

Anyway, that's how I picture Erickson on the sidelines at Arizona State. He might even sneak a few sips of Natty Light (he looks like a Natty kind of guy), while laying into one of his players for a late hit as the player just stands there completely confused because every word is so badly slurred.

Of course, this is all just conjecture. Hell, maybe Erickson is a straight-laced, conservative - but it's a helluva lot more fun picturing him as a booze drinking, chain-smoking stenographer from Long Island.

The game after the jump...

1) Last one to not collapse and die from alcoholic poisoning wins. 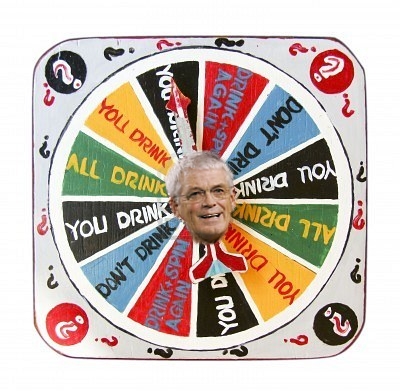