If you've watched Utah's games on KJZZ this season, you'll instantly realize one thing: Steve Brown is an awful, awful sports announcer - maybe the worst in the history of the universe.

This was reinforced when John White IV straddled the sideline on his way to a very important fourth quarter touchdown.

So that got me wondering...what exactly does Steve Brown think about during the football games? 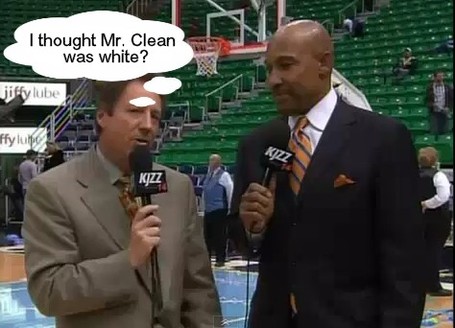 It's a pretty fair question, since it's obvious he doesn't pay attention to the action on the field.

Maybe he admires the scenery or a special fan in the crowd. Maybe he's confused and thinks he's calling a Utah Jazz game.

Fortunately, the Wazzu game (I'm sure Brown thought that was a sound one makes while sneezing - so who knows how many times he said, "bless you..." Saturday night) was the last KJZZ game of the season. Hooray!

But it's not like I won't miss his Brownisms. I won't ever look at an incomplete pass the same way again - you know, without thinking that somewhere in the valley, Brown is screaming at his television, while sitting in his La-Z-Boy, that it's a completion.

Godspeed. Mr. Brown. Thanks for the memories.