The future of the Huntsman Center

Share All sharing options for: The future of the Huntsman Center

I've discussed recently how I feel the Huntsman Center was outdated and that sooner or later the athletics department would have to address its age and tired feel.

Don't get me wrong, the Huntsman Center has great tradition. It's seen some amazing games and hosted arguably the greatest college basketball moment when Bird and Magic met in the championship.

But that's all in the past and right now, the stadium is antiquated and potentially becoming a recruiting liability - similar to how the old Rice Stadium was for the Utah football team.

Granted, the Huntsman Center still has some good years left in its tank and it's nowhere near the hole that wooden mess was by the late 90s. However, if you've attended a Runnin' Utes basketball game the last ten years, you'll notice a complete lack of any type of buzz in the crowd and worse, the arena is often empty.

It's empty because, compared to many other college basketball arenas, it's still fairly large. Its 15,000 seating capacity would make it the largest in the Pac-12 next year and Utah hasn't come close to averaging near that amount since the 90s ended.

Now that they've struggled even worse over the last half-decade, attendance has dipped to its lowest point in the arena's 42 year history.

Yes, sustained winning would dramatically change that and certainly there would be moments where the arena was packed to the rafters. I don't dispute that. However, how convinced are you that Utah would consistently sellout the Huntsman Center over the next ten to fifteen years?

I'm not sure that's possible.

In 1999, they averaged about 170 more fans. This after their historic run to the national championship game and they still failed to draw an average sellout.

Of course, those numbers are extremely impressive when you compare them to the current state of attendance. Here, Utah is averaging under 10,000 and that is absolutely pathetic - even with how poor the team has played for most of the season.

However, what are the odds Utah basketball can return to averaging close to 14,000 a game? It's possible and I believe if the team were competitive over a longer period than just one season (as has been the case with the last two coaches), attendance would increase sharply. But that isn't the case today. We could be a decade or more away from near-sellouts and if that's what we're dealing with here, I believe gradual increases are pretty much the expectations.

That means next year finishing above 10,000 in attendance and, with the move to the Pac-12 and potentially a new coach roaming the sidelines, that is a reasonable expectation.

But will they ever get back to the glory days when the arena was constantly packed? Well I don't believe that was ever the case in the first place - at least not in the last 30 years.

Case in point: 1994. This was a rebuilding season for Utah and there were some tough losses. The Runnin' Utes didn't look all that impressive, but they had established a winning attitude the past few years prior under Rick Majerus. After all, the Runnin' Utes had gone to the Sweet Sixteen, the NIT Final Four and were coming off a second round appearance at the time of this rebuild. Yet with all that success, which bested pretty much anything Lynn Archibald did at Utah, the Utes only averaged 12,645 fans.

That's a surprising number. It's even more surprising when you realize that they averaged only 237 fans more a year earlier. So even at the beginning of the Majerus era, where he was establishing a respectable program, Utah basketball still struggled at times with crowd sizes.

In fact, here are the average attendance figures for Majerus' first five teams:

Those numbers aren't that impressive. Outside of 1992, a year removed from the Sweet Sixteen, Utah basketball was producing fairly average attendance numbers.

Which is surprising because I've been conditioned to believe the program consistently was producing amazing crowds up until recently.

But what about the 70s? Certainly they were selling out then, right?

So while attendance was far more stable and stronger than it is today, we have kind of fooled ourselves into believing the program dominated at the ticket gate. They didn't. When the team struggled on the court, they struggled in the stands - which was the case in 1984 when, in Archibald's first season, the Utes went 11-19.

If past Utah basketball teams struggled, on a year-to-year basis, at selling out, or even coming close to sellouts, why should we expect that to change in the future?

It won't. Utah basketball is always going to have to contend with the Utah Jazz and other events around the city. That's just the way it is.

With that understanding, maybe it's time the athletic department look at retraction of the Huntsman Center or a completely new basketball arena. The latter is something many college basketball programs are currently doing because their arenas have proved outdated and a hindrance on recruiting.

Are the Utes losing out on recruits because of the Huntsman Center's age? No. And that's not the point I'm trying to make. I think the Huntsman Center, for its age, has held up pretty well. But I also believe there are massive benefits to either a new arena or a remodel of the current one.

For starters, visiting recruits are well aware of the arena's atmosphere and right now, the Huntsman Center lacks any type of electricity. You know things are bad when you can actually hear Jim Boylen cough on the bench.

A new arena will definitely create buzz. That isn't up for any debate. When you build a new arena, fans will flock to it just because it's something new and they want to get a taste of the experience. Rice-Eccles Stadium, which was much larger in size and capacity than its predecessor Rice Stadium, is evidence of this.

Utah football didn't magically improve from 1997 to 1998. The results were very similar and yet, there was a huge spike in attendance.

So it will happen. Is it sustainable? No, of course not. That newness factor will wear off and fans will become the apathetic creatures they current are and that's just how it is.

But it's a start. It creates excitement and a crown jewel to take recruits to when they visit your school.

We don't have that right now. I can guarantee you most college kids could give a lick about the tradition of our basketball arena. They don't care that 30 years ago both Larry Bird and Magic Johnson performed an epic battle on the hardwood there. That is not important to them. Facilities are, though. This is their institution just as much as it is the fans and they want to take pride in their arena. They want to be blown away by its state of the art everything.

And outside the newly added jumbotron, there is nothing state of the art about the Huntsman Center.

The arena also is probably never going to host a NCAA tournament game again. That's now going to happen a couple miles west at the ESA. They're set to host the first and second rounds in 2013.

More importantly, though, with the discussion of attendance, maybe it's time we start realizing the arena is too big for our program. No one wants to admit that because in doing so, we concede this program isn't a major draw. Sadly, it isn't. There will be games that do draw fans in and certainly sellouts in the future, but on the whole, you can't expect that for a team that plays 16 or so home games a year - many against bad opponents.

A new arena, with a capacity of maybe 12,000, I think would be perfectly fine for a program of Utah's size.

The lower capacity would make it less cavernous when playing in front of sparse crowds and you could set the stands so that the fans are right on top of the court - something similar to what you see in the lower bowl of Energy Solutions Arena. If you've been to a Jazz game, you can see how intimidating the crowd is for this very reason.

Along with a new arena, you could build a connecting basketball facility that is much needed for the program. There are plans for it, but nothing has started yet and no timetable has been set.

Maybe, though, it's not feasible to build an entirely new arena. Maybe the University needs to do what they did at New Mexico with The Pit, which just finished its renovations.

Let's renovate the Huntsman Center. Then you get to keep what has made it such a staple in the Salt Lake community for all these years - but also update it for the 21st Century. We might already have our crown jewel. It just may need a bit of polishing.

The renovation could drop the capacity, update the concourses, the coaching offices and locker rooms, establishing a truly great and modernized arena.

What I would love to see is more natural light in the arena. I've always hated how dark and brutalist the inside of the arena looks. It reminds me of the inside a Cold War era bunker and I think we can open things up a bit. The concourse could be redone with massive lighting and windows that bring in the outside light and if you're lowering the capacity, maybe open up that concourse by doing away with the upper bowl.

This is a crude mockup of what I think could work: 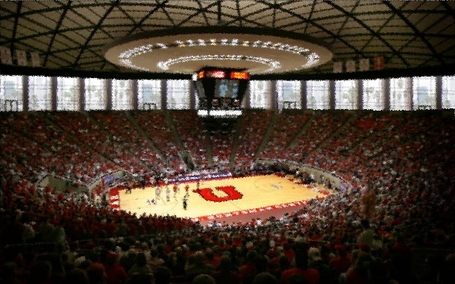 The concourse opens up at the very bottom of the upper bowl. With these massive windows that reach to the dome of the arena, you're bringing in a bunch of new light that will not only fill the concourse, but the entire arena. It will also offer great views of the Wasatch Mountains and the Salt Lake Valley because the arena sits perfectly on a hill.

Capacity would be lowered, but the arena would be far more intimate without losing its charm.

Ultimately, there is nothing down the pike that suggests there is a chance for a new arena or renovation. But it's not a bad idea and certainly in the next decade, as the Huntsman Center closes in on 50, more and more people will wonder if the arena has outlived its usefulness.

Maybe it hasn't. Maybe I'm completely in the wrong here with my belief. But then again, maybe I'm not.