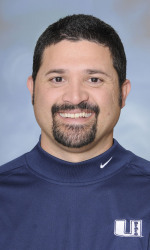 Kauha'aha'a returns to the Utah football program after spending two years coaching the Utah State defensive line. Prior to his stop in Logan, he coached the same position under Ron McBride at Weber State for four years.

Beyond his hire, Kyle Whittingham announced some other coaching changes:

This is probably the biggest overall shakeup on the offensive end since the completion of the 2008 season. But, as I've said many times on Block U, it was needed.

What are your thoughts on these moves?