Share All sharing options for: Utes getting good ESPN buzz 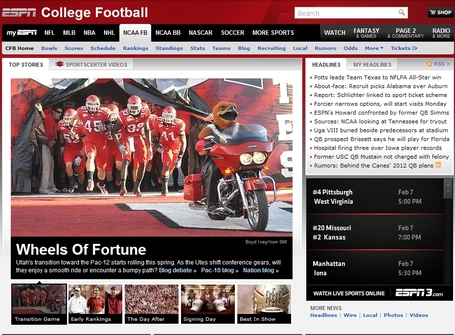 Today's ESPN college football page is devoted to Utah's move to the Pac-12. Both Andrea Adelson (the blogger for the non-BCS teams) and Tim Ted Miller (the Pac-12 blogger), had a bit of a back and forth discussing the move and Utah's chances.

It's a good read and I think balanced well.

Adelson, who has covered the Utes more recently, seems to give them a bigger benefit of the doubt than Miller. Which isn't a surprise, because Miller isn't entirely too familiar with the team. He even admits there is a potential bias to what he's saying. For what it's worth, Miller has consistently said he expects a 6-6ish record out of Utah, while Adelson believes they'll finish 9-3.

9-3, in my opinion, would be an amazing first year for the program and might signal they were more ready for the move than originally thought.

Which would definitely bolster the claim that there isn't a dramatic difference between the non-BCS and BCS.

If anything, non-BCS teams better hope Utah legitimizes them this upcoming season. If they flop, they not only hurt their credibility, they hurt every other non-BCS team's in the process.