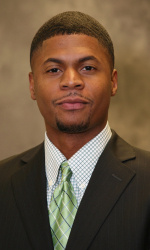 I reported late last week that Larry Krystkowiak was on the verge of hiring Colorado State's DeMarlo Slocum. Well it's official now, as the program has announced his hiring.

Slocum, who has strong ties to the AAU circuit, is from Las Vegas, Nevada and has coached at USC, Dixie State, Idaho and, of course, Colorado State - where he's spent the last three years there under Tim Miles.

He is young and his experience at the Power Conference level is very limited. But I do like his ties to Nevada and the AAU - he was coach of the AAU Las Vegas Prospects for five years.

Krystkowiak has still yet to make his final hire, though it seems likely that spot will be filled by Andy Hill, who is currently the lead assistant at Montana.

Earlier it looked like Alex Jensen could be making a return to Salt Lake. However, that appears unlikely now.