Share All sharing options for: Why Krystkowiak ain't Jim Boylen or Ray Giacoletti 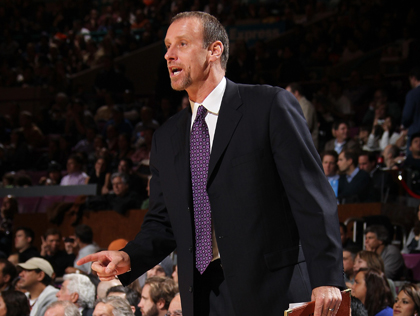 I'm going to try something different here and go a bit positive on ya'. I'm not really sure what to make of the Krystkowiak hire, but I'm ready to give it a try.

At least until the first loss.

Okay. So when I first heard Krystkowiak's name batted around (again) last week, I clammed up and instantly thought Boyliac - Utah fans' worst nightmare. I mean, why not? He did, after all, roam around both Giacoletti's and Boylen's old stomping grounds (Big Sky, NBA respectively). However, going positive for a bit, let's try to look at this rationally and optimistically.

It's the least we can do, right?

Ray Giacoletti came to Utah a young and energetic Big Sky winnin' ball of Italian who the hell is this, and, after three grueling and disappointing seasons, we quickly found out exactly who the hell he was - a not so ready for primetime program killer.

In retrospect, we should have known that. Look at his resume at Eastern Washington and try to find anything that jumps out at you:

I don't know if Giacoletti was OCD, but looking at these results, you'd have to think he had some sick fascination with seventeen wins.

But for whatever reason, the man avoided twenty wins like the plague.

Big red flag. Yeah it's Eastern Washington - but hell, even Randy Rahe at Weber State has been able to easily cross the 20-win threshold three out of his five seasons there.

Now it's true Krystkowiak is another Big Sky lackey and one that didn't even win a regular season championship at that, but he is not Ray Giacoletti. At least outside the ridiculous amount of syllables in both their last names.

If Giacoletti was the epitome of Big Sky Average, Krystkowiak probably deserves to be classified as Big Sky Superstar.

And this I do mean.

Krystkowiak won 24 games in his second season at Montana. Giacoletti, between his stops at North Dakota State and Eastern Washington, failed to do that at any point. He just could not win 20-games. Hell, in Krystkowiak's first season, he even bested anything Giacoletti did when you factor in Montana's NCAA Tournament berth.

But Krystkowiak is Mr. Big Sky Superstar because he's the last guy to coach a Big Sky team to the second round of the NCAA Tournament. Prior to that, you have to go all the way back to Weber State's 1999 win over North Carolina in the first round (wow, the Tar Heels were the state's bitch two years running) to find the last time that happened.

The Big Sky just does not produce tournament winning teams.

So score two for the Krystkowiaker.

Then there is our balding mic screamer Jim Boylen.

He was supposed to bring a different layer to Utah basketball. He could look a recruit in the eye and say, "you know, I've been the third assistant on a few teams in the NBA and I can get you to the association..."

Yeah. That never happened. None of Boylen's players can be found on an NBA roster today.

But there is a difference. Krystkowiak has been a head coach in the NBA. Oh sure, it ended badly and ended quicker than a typical Las Vegas marriage - but he can legitimately claim to be a NBA head coach.

That's something Boylen probably only dreamed of doing while he warmed the assistant chairs in Houston, Golden State and Milwaukee (err, they both coached the Bucks...oh Jesus! Wait! So did Majerus...is there some crazy bylaw in the University charter that says the basketball program must hire a former Milwaukee Bucks assistant?).

Boylen also spent his entire collegiate coaching career at Michigan State. This is no knock on Boylen, but they weren't racking up the wins because he was an assistant to Jud Heathcote and Tom Izzo. Truth be told, their last really great season (when they won the whole shebang in '00) came when Boylen was lost in NBA obscurity.

In fact, Boylen was only around as lead assistant for a grand total of two seasons and none resulted in a deep tournament run (the Spartans were bounced in the first and second rounds his two years there).

He also wasn't a head a coach. Ever. Not at any point in his career. Krystkowiak, even if briefly, can say he was. Yes, it was for only two seasons and they happened five and six years ago, but that's still two more than Boylen brought to the table.

So it's like Krystkowiak lived out Jimmy B's dream. He was a head man at the college level (twice) and led his own NBA team.

Now does that mean good things for Utah? I don't know. But after deep reflection (serenity is a good thing), I have come to the conclusion that while Krystkowiak does have some issues, he certainly is not Jim Boylen or Ray Giacoletti. Or some hybrid monster of both.

He's got a far better resume than either when they accepted the gig and because of this, I expect he'll do vastly better than his two predecessors.

Of course, both did set the bar pretty low...