Share All sharing options for: Utah versus the Pac-10 - top five games of the last 20 years

I'm not good at coming up with lists because I feel I'm always going to gloss over an important game or rank one game higher than it should be solely because of nostalgia. But I couldn't pass up this opportunity.

Utah football, though lacking Pac-10 affiliation, has had some great games over the years against that soon to be renamed conference. Surely this list could be greater than five games and maybe it should - but this countdown fits perfectly with the amount of time the Utes have left as a non-member of the Pac-12.

By Friday, when the number one game is revealed, Utah will be a proud member of its new conference and each subsequent game against the five teams listed throughout this week will now be considered a conference contest.

But until that happens, let's look back at some of the games that, who knows, could have helped put the Utah program in this position.

We begin with number five after the jump...

Certainly this game wasn't nearly impressive in November as it was in September when it happened, and the loss to UNLV a week later kind of puts a damper on the whole upset, but it's impossible to ignore just how great the feeling was when it happened.

The Bruins walked into Rice-Eccles Stadium with a bit of swagger on their part. They were 2-0 and coming off a decent win, at home, against the BYU Cougars. Utah, though, had opened the season 0-2 and were still without their starting quarterback Brian Johnson, who had been injured in the season opening loss to Oregon State two weeks prior.

By all accounts, even with this being a home game for the Utes, no one really gave them a chance. They were double-digit dogs in Vegas and a program on the brink of its first 0-3 start in seven years.

I remember walking around the stadium prior to kickoff and sensing there was a lack of buzz that you would expect from hosting a top-11 team. Maybe it was the realization things would most likely go south fast or the idea that the season wasn't going to start for the Utes until Brian Johnson returned to the lineup - whatever it was, from my perspective, fans didn't treat this as a monster game. There wasn't much pre-game hype and it felt more like Utah was getting ready to take on UC Davis and not 11th ranked UCLA.

But that entire mood changed in a split second.

Before some fans could even find their way to their seats, former Utah quarterback Tommy Grady lobbed a 53-yard bomb down the right sideline to Marquis Wilson and just like that, seven plays into the game, the Utes led 7-0.

At that moment, you could feel the crowd's mood shift from indifference to hope.

Could Utah really knock off the Bruins?

Of course, it was early and there was a whole helluva lot of football left to be played.

Sure enough, the Bruins answered back. They marched down the field, easily crossed into Utah's 15 and looked poised to tie the game.

Then their drive petered out. After two consecutive plays that netted the Bruins a loss of 8 yards (including one of many sacks on Ben Olson), UCLA was forced to kick a field goal. It was good and the Bruins cut into Utah's lead 7-3 early in the first quarter.

The score would remain 7-3 throughout the remainder of the quarter and at that point, fans started getting on board with the idea that an upset could be happening right before their eyes.

Who would have expected Utah to lead 7-3 heading into the second quarter?

Unfortunately, that feeling didn't last. Early in the 2nd, UCLA sacked Grady and forced a fumble - on Utah's side of the 50. They recovered and were in prime position to score.

That's all she wrote. Right?

Not so fast. The Bruins did score, but it was only another field goal and the Utes held on to a one-point lead.

The game remained 7-6 for a few more series and then, right before the half, the Utes orchestrated a nine-play drive that resulted in a great touchdown pass from Grady to Darrell Mack and just like that, after being shutout most of the first and nearly all of the second, Utah was up 14-6 heading into the half.

My first thought at the half was that ESPN was probably showing this game as an UPSET WATCH on its ticker and that made me giddy. I knew there was still a chance the Bruins would come back and win this game, maybe even by a significant margin, but at that moment, at the half, the Utes were leading - they were leading the 11th ranked team in the nation.

It's funny, when I got to my seats at the start of the game, I wasn't nervous in the least. I was pretty passive and just hoping for good football. That's all I wanted out of that game, for a sign the Utes were going to compete.

Now, though, I wanted more. I was nervous and kind of dreading the start of the second half. This was all or nothing now and if Utah was going to win this game, they would have to fight back the Bruins' advances. UCLA wasn't just going to roll over and die - not with so much on the line for them. Or at least I thought.

The third quarter started rather uneventful at first, though- as both teams stalled out on their first few drives. However, in the process, the Utes were flipping the field and it resulted in a 39-yard UCLA punt from their own 7 that was returned 19 yards by Derrick Richards. It put Utah in perfect scoring position. Worse case here was a few incomplete passes and a field goal to push the lead to 17-6.

And that's exactly what happened. Louie Sakoda hit on the 47-yarder and Utah pushed their lead to two scores.

In fact, it was the next series for the Bruins that very well could have defined the game.

UCLA needed something to get back into this game. Trailing by 11 early in the second half isn't an insurmountable deficit, mind you, but there was no evidence the Bruins were capable of finding the end zone and sooner or later, they would need to put up seven rather than three.

It was this series that it nearly happened and very well could have switched momentum in favor of UCLA.

Olson had two quick passes to start off this drive and then a one-yard run by Kahlil Bell gave the Bruins a first down at their 43. On that first down, Olson hit Marcus Everett for a 51-yard bomb who looked certain to score UCLA's first touchdown of the game.

Then in came Robert Johnson. Johnson forced the fumble, which bounced out of the end zone and subsequently not only ended UCLA's drive, but stopped them from scoring a game-changing touchdown.

That was the ballgame.

On the next possession, Utah rolled down the field and ended a perfect drive with a trick pass from Corbin Louks to Dallin Rogers.

The Utes would score on a field goal nearly a minute later and took a 27-6 lead into the fourth quarter.

As I mentioned earlier, I entered the second half really nervous about this potential upset. By the start of the fourth quarter, though, it was an extremely relaxed and festive atmosphere at Rice-Eccles Stadium. Every score was met with a louder cheer and as the seconds finally ticked off the clock, the fans stormed the field and celebrated the improbable.

It was the highest rated opponent Utah had defeated in a generation.

Did the win hold up by the end of the season? That's debatable. Who knows how good UCLA really was that season. They never could recover from their debacle in Salt Lake City and it cost Karl Dorrell his job.

For Utah, though, it was one of nine wins after a horrible, horrible start. They may have followed up that big victory over the Bruins with an equally big loss to UNLV - but that week in September gave Ute fans hope that maybe 2007 wasn't going to be a disaster after all. And it wasn't. 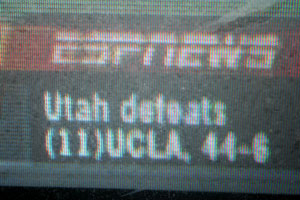 I snapped this when I got home from the game. It was the breaking news headline on ESPN. Don't ask me why I still have it!