Share All sharing options for: Utah versus the Pac-10 #4: Utes beat SC

How much has changed since this game was played in 2001? Well look at it this way - the Trojans were content with a 6-5 season.

USC rolled into the 2001 Las Vegas Bowl on a four game winning streak and were coming off a shutout of crosstown rival UCLA. They were coached by a then relative unknown NFL flunky named Pete Carroll and were being led from under center by a quarterback named Carson Palmer.

Utah, on the other hand, entered this game on the heels of two consecutive heartbreaking losses that pretty much defined the Ron McBride era. The first came when Utah blew a two-score lead late against the then undefeated BYU Cougars and they followed that defeat up with a stunning 37-38 defeat at Air Force. That latter loss happened when the Utes blew a lead late and, inexplicably I might add, failed to set up for the game-winning field goal and instead Lance Rice ran out of bounds as time expired.

So Utah lacked momentum heading into this game. Two close defeats, one on the road against a team that had suspended 12 players due to curfew violations, will do that to you.

Of course, that '01 team was pretty good. They were a play or two away, really, from finishing 11-1. Alas, that's not the way McBride did things at Utah. It wouldn't be a football season in the 90s without at least one gut punch.

But this Vegas Bowl was their chance at redemption and even though it was coming against a down Trojan program - they were still mighty USC and, truth be told, they deserved a bit of payback for the '93 Freedom Bowl.

This game took place on Christmas Day in front of a then-record Las Vegas Bowl crowd. It was not a pretty contest. Utah won this game namely because of its defense, which shut down Palmer and the SC offense that had really ripped four of its last six opponents heading into this game.

Adam Tate and Dameon Hunter were really the difference maker on the offensive side. Though the Utes struggled for most of the contest, it was their methodical running attack behind Tate and Hunter that really set much of the tone. Tate had Utah's lone touchdown and Hunter was named the MVP.

Though they only scored 10 points, it's all they needed because the defense ruled the day.

Palmer, we soon found out, was Heisman worthy and this game was really the last poor performance the Trojans produced under Carroll for quite a few seasons. In fact, it was only two seasons later that they won the national championship.

Yet on that Christmas day in 2001, Utah beat 'em pretty good. They held the Trojans to just one rushing yard (yeah, you read that right) and 151 total yards on the day. Palmer, that great legend in the making, was 15-26 for 150 yards with zero touchdown passes.

In fact, the lone SC score, ironically enough, came on the ground.

Carroll's Trojans would not produce a worse offensive performance the remainder of his tenure there and so far, Lane Kiffin has managed to keep that dubious distinction at bay.

Overall, it was not a program-defining victory and certainly SC wasn't at the level we came to expect of them later that decade. However, prior to that bowl game, the Trojans were turning into a team that was very similar to what we saw during the height of the Carroll era.

But on that day, Utah managed to fight back that transformation for at least one game and salvaged a season that, prior to kickoff, was turning into a big disappointment. 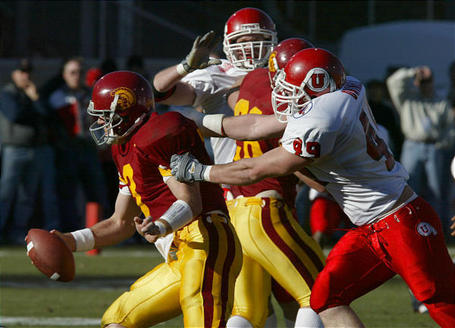