Cultivating a rivalry with Colorado

Share All sharing options for: Cultivating a rivalry with Colorado

When Utah last played Colorado in football, the United States was on the eve of potential nuclear holocaust with the Soviet Union.

A mere month before Pres. Kennedy stared down the Soviets during the Cuban Missile Crisis, the Utes would go on to upset the Buffaloes in Boulder to start the 1962 season. Utah finished that year an uneventful 4-5-1 and the two programs would not meet again.

Fast forward 49 years and we're expected to accept Colorado as our natural rival.

On paper, I guess it makes sense. Utah and Colorado are border states. There has been a consistent and established rivalry between our two states, in varying degrees, over that 49 years.

The major one, which has been present probably since western expansion, has to do with skiing. Utah claims to have The Greatest Snow on Earth - but I'm guessing Colorado will protest such a decree.

Both economies are in constant competition with one another because the ski industry plays such a major role. It's really what defines Utah and Colorado generally more than anything else and really has opened up both states as more than just flyover country on the way to California.

That rivalry will always be there. But it's a rivalry that is subjective. There aren't really any results, or head-to-head competition, to go by when claiming a winner. When Ute fans say they're better at football than BYU, they only need to point to last year's result as relative proof of that claim. Not so with snow.

We can't definitively answer who has the best snow. So there isn't much contention there.

When it comes to sports, though, you're dealing with an entirely different animal.

Back in the ABA days, the Utah Stars and Denver Rockets/Nuggets vied for the Orbiter Trophy - a gaudy mass of wood with an airplane topping a basketball that was created in 1973. 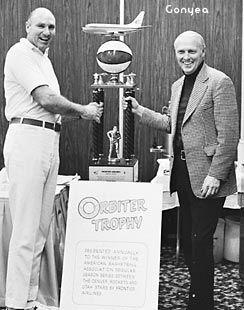 Of course, that was a league that hardly took itself seriously. The rivalry between both franchises was more for show than anything to do with competition. In all reality, the Stars had stronger and more heated rivalries with the Kentucky Colonels and Indiana Pacers.

The Orbiter Trophy was artificial and back then, I'm assuming most Stars fans didn't really invest all that much into the so-called rivalry.

That's not to say artificial is bad. Real Salt Lake and the Colorado Rapids of the MLS essentially created the Rocky Mountain Cup from scratch. That began in 2005 when RSL joined the league and though neither club had any connection or history with the other, it didn't deter from the rivalry.

Today, it's pretty darn successful and considered one of the best rivalries in Major League Soccer.

But will that work for college football? I'm not so sure. We're not talking about a clean slate for either program. Both Utah and Colorado have a laundry list of games, moments and history with other teams - specifically other rivals.

For the Buffaloes, much of their history is tied to their rivalry with Nebraska. They can point to certain moments over the years that defined their season. Like in 2001, when Colorado upset the Cornhuskers 62-36 to claim a spot in the Big 12 Championship. It also, at the time, appeared to end Nebraska's title hopes (though, for some ridiculous reason, they were selected for the BCS championship game - they lost).

Blocking a field goal to win a game is significant, obviously, but doing it against your rival elevates that contest to legendary status. Utah beating Minnesota on a blocked field goal that was then returned for the winning score as time expired is a moment all but lost by time. Had that happened against BYU, though, and it's a story passed down from generation to generation.

A great deal of the time, rivalries are not a creation out of necessity. They're a creation of so much more. Close games. Contested moments - knowing your brother or sister is cheering for the other side.

Here in Utah, it's not hard to see why the Utah-BYU rivalry worked so well, even when one team or the other was struggling.

It's going to be hard for something similar to happen with Colorado. Sure, our states are neighbors, but they're not our neighbors.

So we can't just expect that this November, when Colorado and Utah meet for the first time in 49 years, that there will be any type of rivalry.

Which means this rivalry is going to have to be created the old fashion way - on the football field.

I look at the potential Utah-Colorado rivalry similarly to the creation of the Utah Jazz-Denver Nuggets rivalry.

When the Utah Jazz began play in 1979, only a few years had lapsed since the dissolving of the ABA. Yet there was no initial rivalry between the Jazz and Nuggets in the early 80s.

That started to change in 1984 when Utah won the Midwest Division and met Denver in the first round of that year's NBA playoffs. The two played a very even series to an all-or-nothing fifth game in Salt Lake City. The Jazz won that fifth game and advanced to the second round of the playoffs that year.

A year later, the two would meet again, in the second round, and this time Denver won.

You had the potential for a great rivalry at that point. Both franchises were now becoming very competitive (Utah was just at the start of the Stockton & Malone era and Denver was playing in the Western Conference Finals), they played in the same division, there was a history and, more importantly, the two were neighbors.

But 1985 would be the last time the two met in the playoffs for almost a decade and after that series, both franchises diverged from one another - with Utah becoming one of the most successful teams out west and Denver one of the worst.

In the 90s, the Jazz found better rivalries with the Lakers, Houston, Portland and Seattle - not the Nuggets.

But things changed in 2003. Denver, after years of basketball struggle, drafted Carmelo Anthony and found themselves competing in the always difficult Western Conference.

Utah, though, was fading. John Stockton had retired and Karl Malone was off to La La Land in quest of that ever elusive NBA title (he never got it).

But the Jazz were still coached by the legendary Jerry Sloan and, as we've come to expect under his leadership, with him on the sidelines, Utah would almost always be competitive. Though the team lacked any type of real talent, they were still in contention for the last playoff spot heading into the final week of the NBA regular season.

They were locked in a battle for eighth with the up and coming Denver Nuggets.

The Jazz would eventually fail to qualify for the playoffs and the Nuggets returned to the postseason for the first time since the 1994 season.

There is where the seeds were planted for this rivalry. It didn't hurt that the states were close to one another and that Utah and Denver played in the same division. But for the first time, really ever, the Nuggets actually won out against the Jazz. The franchises traded places. Now it was Utah on the outside looking in and it would remain that way for a few seasons.

Then came Deron Williams and Carlos Boozer. Just like that, the Jazz were now battling Denver for the division title.

Contention! These two franchises were finally, for the first time in their histories, contending with one another for the top spot and the all important fourth seed in the Western Conference.

During that span, I came to hate Denver. The Nuggets were the enemy more than any franchise not named the L.A. Lakers. They were the team standing between Utah and a division crown.

Then the two met in last year's playoffs. It was the first time since 1994 and it was a completely different feeling than when those two teams met in the semis 16 years prior.

In '94, the Nuggets were just this pesky gnat of a team that was more of an irritation than a threat. In 2010, though, beating them in the playoffs was exhilarating. Who cares if the Jazz were swept by the Lakers in the next round (okay, I cared, but still...), beating Denver, those awful Thuggets, was bliss.

That's where a rivalry was born. I think Jazz fans now consider Denver a realistic and viable rival. That wasn't the case ten years ago, but it is now because the two teams were on equal ground.

When you don't have a natural rival, that's where hatred is born. It's watching your team lose a must-win two or three seasons in a row to the same opponent and realizing they're the biggest obstacle between you and your goals.

For this rivalry to work, Colorado can't stay at the bottom of the Pac-12 South. If, in five or six years, the Buffaloes are still cellar dwellers, there won't be a rivalry - no matter how hard the conference pushes it.

Fortunately, for the rivalry's sake, Colorado has been far more good than bad the last 30 years. There is precedence to expect a turnaround.

If that happens, and Utah and Colorado are battling it out for the Pac-12 South, or even bowl contention, then there is no reason not to expect a rivalry to grow out of it.

It's just going to take more than one or two seasons.