Utah versus the Pac-10 #1: Utes taste relevance with wins over Oregon & Arizona

Share All sharing options for: Utah versus the Pac-10 #1: Utes taste relevance with wins over Oregon & Arizona

For thirty years, Utah football was pretty much a wasteland. No coach could sustain success here and it led the program into the dire straits.

Then Ron McBride took over and the entire environment on the Hill changed seemingly overnight. It was telling that, in his second game as coach, the Utes stunned Minnesota on a blocked-field-goal-returned-for-a-touchdown-as-time-expired-for-the-win. It really signaled that much of the bad voodoo that had inflicted the program since Cactus Jack Curtice departed for Stanford might finally have been exorcised.

In 1992, Utah made its first bowl game in nearly 30 years and two years later produced, up until 2004, the best season in school history.

1994 was really when it all began for Utah football. It was the first time Ute fans tasted greatness and though the program failed to reach that same heights again until Urban Meyer roamed the sidelines, that season, that team, allowed us to believe in what once was a struggling program.

The third game of that season came against the Oregon Ducks. Oregon wasn't perceived as a great team at that point. They had entered '94 on the heels of a losing season and walked into their game against Utah 1-1 - with their lone win coming against Portland State.

So the victory wasn't entirely shocking. After all, a couple seasons earlier, Utah beat the Ducks in Salt Lake City. We had been there and done that - even grabbing a win in Oregon against the Beavers.

This win, like a fine wine, only improved with age. As we now know, the Ducks would go on to win the Pac-10 and play Penn State in the Rose Bowl (a 38-20 loss). Up until that defeat, Oregon suffered only one loss after falling to the Utes in Eugene - a 21-7 setback to Washington State on the road. They went 5-0 at home, beat a decent Iowa team coached by the legendary Hayden Fry and knocked off Washington only a few seasons after their national championship run.

What made the victory so special, beyond what the Ducks did after their defeat to Utah, is the fact the Utes won handily, on the road, against a solid Pac-10 squad.

Kareem Leary really blew this game open in the second quarter with two interceptions, including one that was returned 38 yards to put Utah up 21-10 at the half. Former quarterback Mike McCoy also produced a solid game, going 28-39 for 309 yards and two touchdowns.

The win set up a string of solid performances for the remainder of the season and though the Utes would falter two weeks in a row late, they rebounded to beat a ranked BYU team at home and then faced Arizona in the Freedom Bowl.

Arizona entered the '94 season as a favorite to contend for a national championship. They opened that campaign rather impressively and rose to 6th nationally in early October before a devastating setback to Colorado State at home. The loss took the Wildcats out of the championship picture and grounded the program quite a bit from their earlier expectations.

Losses to Oregon and SC ended any hope of a Pac-10 title and, after finishing the regular season with a win over rival Arizona State, Arizona was invited to play in the Freedom Bowl against Utah.

So the season was ending similarly to how it began - against a Pac-10 opponent away from Salt Lake.

It was an unlikely set of circumstances for a Utah program that had, only a few weeks earlier, crashed the top-ten looking to nudge its way into the national championship picture. Two defeats later and they were regulated to a lower-tier bowl, losing out on a chance to play in a major bowl game for the first time in school history.

I guess that's the ironic thing about the '94 season. It started with tempered expectations that quickly rose with every victory and, in the end, Utah was playing in the same bowl game it had the season prior (a loss to SC).

Of course, this was for a bit more than that contest in 1993. The Utes had a legitimate shot at finishing the season ranked and, for the first time in school history, they were on the cusp of 10-wins. Never before had the program been that close to greatness and even though there were two losses that dampened the overall enormity of '94, had they lost this game and that season is most likely lost in time - more remembered for what it could have been instead of what it was.

Maybe, in the end, that's exactly how we see 1994, I don't know. But that win over Arizona put an exclamation point at the end of the best season in school history.

But it almost didn't happen. Utah nearly blew it and probably should have blown it. The finish was as unlikely as we've seen in recent memory and cemented the Freedom Bowl performance as one of the best moments in Utah football history.

I wish I had video of Utah's final score. I don't. I can only go off broken memories and quick recaps. Mike McCoy, on fourth down, threw up a desperate pass that was somehow caught by Kevin Dyson for the winning touchdown.

Did that just happen?

Yeah and boy was it magical.

Dyson would have never been in position for that two-yard score, though, had it not been for Cal Beck's 72 yard kickoff return to Arizona's five. I say this with such certainly because Utah only had a total of five first downs and 75 yards of total offense - for the entire game.

Which was surprising due to the fact that the Utes entered the game with the 11th ranked offense in the country. Though it's hard to believe with how offensively inept Utah seemed in McBride's latter years here, in '94, they were as close to an offensive juggernaut we've seen at Utah (at least until Meyer rolled into town).

But Arizona, back in those days, was known for its Desert Swarm defenses and they really put the clamp down on the Utes. They also nearly won, but Utah had one last miracle left in that miraculous '94 season.

It's hard to put into words what those wins meant for the program. The Utes had defeated Pac-10 teams before (both Stanford and Oregon State on the road in the 80s and 90s), but they never really gained a major victory, either in a bowl game or on the road, against the elite of that conference.

You've got to remember that, in the two years before the '94 season, the Utes fell to Washington State in the Copper Bowl and then the Trojans a year later in the Freedom. Both defeats were close and could have been won by Utah - but they came up short in the end.

Sure, they could never sniff those heights again under McBride (came close in '99), but that season taught Utah how to win. I'm positive without those two victories, what came in the wake of that season is vastly different, and much worse, than what we've experienced.

In fact, you can say every game on this week's list played a vital role in making today happen. I guess it's fitting that so many historical and important wins over the last 20 years came against the conference Utah has now officially joined.

Here's to new memories with our new conference rivals. 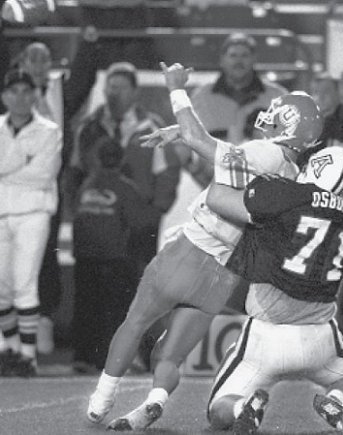