The Pac-12 media day is in the books and we learned, well, not a whole lot. Every coach who took the podium to address the media kept it pretty bland and that was to be expected, since no coach is going to tip his hand at this juncture.

So if you expected Chip Kelly to admit to wrong doings or Rich Neuheisel to discuss his failures as a coach with UCLA, you were disappointed.

For Ute fans who have listened to Kyle Whittingham for all these years, Tuesday was uneventful and not much different from his weekly press conferences during the season. The team will work hard, do what it does best and come ready to play every single Saturday (except against TCU and Notre Dame).

Not really. But media day isn't really for information. It's a moment to digest the realization that, within a month or so, we'll be starting the 2011 season. It's kind of like the first snowfall that signals the arrival of winter. It might not be anything spectacular, but you know what waits around the corner.

If you missed today's media day, you can get caught up here. There you can find Whittingham's press conference and even read the entire transcript.

The most pressing thing, outside of Utah's goal to win the South, is that Jordan Wynn won't be thrust into fall camp, rather progressed along as camp progresses. Whittingham stressed Wynn was 100% and his shoulder was solid, but that he and Chow decided it would be best to not wear him out early.

That's about the must noteworthy thing to come out of Tuesday. Well that and the fact Utah was selected to finish 3rd in the Pac-12 South by the media.

So with all that out of the way, enjoy the following two photos... 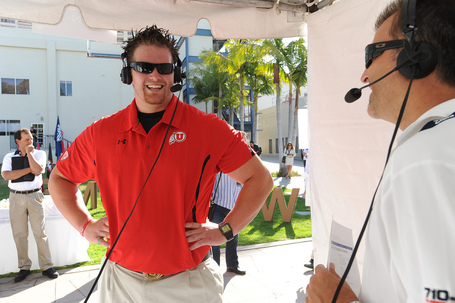 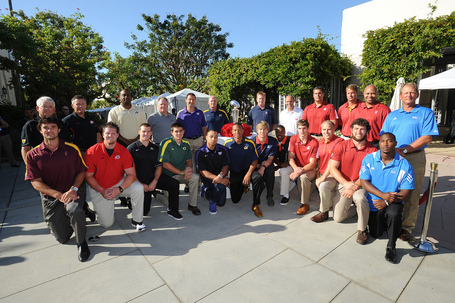 Remember, Whittingham will be making the rounds at ESPN all day today, so be sure to watch (and listen).