Share All sharing options for: Wynn's arm feels good, Blechen gets stung in the mouth & receivers drop the ball

Utah kicked off its fall camp today with Jordan Wynn making an appearance, throwing the ball and feeling pretty good.

That's what we want to hear.

Brian Blechen, though, well his throat is hurting a bit after a bee flew into his mouth and stung his throat. That had to sting.

He'll be all right.

As for the actual practice itself? Kyle Whittingham liked the intensity, didn't like the dropped passes by the receivers.

If you remember the Las Vegas Bowl, you certainly don't want to be reading quotes like this:

"Way too many drops by the wideouts and tight ends,"

Of course, it is the first day, so let's not hit that panic button just yet.

Whittingham also decided this year they'll pump in irritating music to help get the team in a bad mood hoping they work harder for it. This is what we call the Noriega Effect and I can neither confirm or deny that Rebecca Black's Friday was the song of choice.

Overall, it wasn't a bad start to camp. No major injuries (outside Blechen's throat), though Anthony Denham did sit out with an injured hamstring, Wynn's back and it's always good seeing red and white on the football field again. 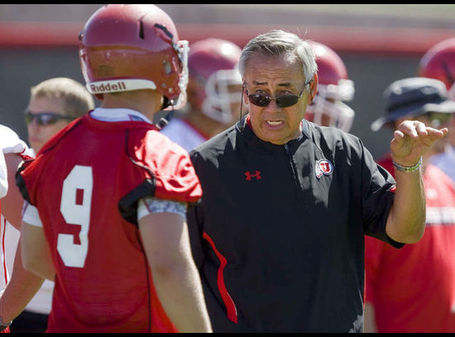