The Pac-12 tournament is here - can the Utes do something?

Share All sharing options for: The Pac-12 tournament is here - can the Utes do something? 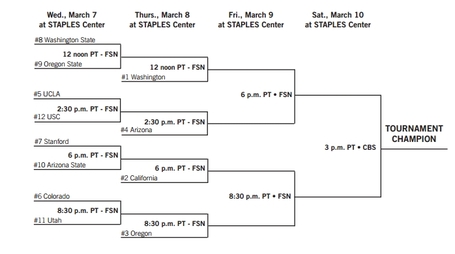 Utah's long, windy road to the end of a dreadful season takes a detour to Los Angeles as they ready for their first-ever Pac-12 tournament.

No one anticipates they'll get out of the first round, let alone win the whole thing and punch their ticket to the NCAA Tournament.

Still, without hope, what do we have? Not a damn thing. So, as I do every March, I'll blindly hope the Runnin' Utes somehow find enough magic to make a magical run. It's not going to happen and I think we all know that. But, at least it's March Madness, and, so I'm told, there is nothing quite like it.

So, what should we expect? Well, after this weekend's humiliating defeat to the Oregon Ducks, hopefully a respectable, competitive game. Which could happen, since the last time Utah played Colorado, late last month, the game was pretty close.

Of course, that was here in Salt Lake and, for whatever reason, the Utes piss the bed away from home more times than a seven year old. Though, to be fair, it's not like they've redeemed themselves at home, either.

But it's March and this is the time for upsets and improbabilities.

Here's to that happening Wednesday night.