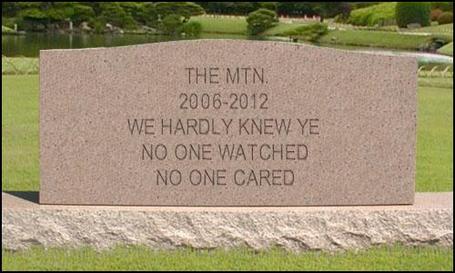 The mtn. is dead. The fledgling network, which started in 2006 and ultimately had a hand in the collapse of the Mountain West Conference Utah fans are so familiar with, will close up shop at the end of next month.

For Utah fans, especially those who lived out of state, the mtn. proved to be a far bigger nuisance than benefit. Its coverage was often lacking and the quality of their broadcast suspect. It did, however, provide consistent and in-depth coverage for the entire league, opening new broadcast avenues for the lesser seen sports.

Not many conferences, especially non-BCS ones, had such a deal.

For the Mountain West, this is just more evidence of the conference's ongoing revamp since Utah joined the Pac-12, BYU went independent, TCU departed for the Big East, and then the Big 12, and Boise State, along with SDSU, announced their departure for the Big East.

This is definitely not the conference the Utes helped establish in 1999. Much of that ties back to the bungling of the mtn. television deal, which had far too much uncertainty when it launched in '06 and, six years later, it appears not much has changed.

Hopefully the Pac-12 Network is run far better when it launches later this summer.