Keep the rivalry, even if not annually

Share All sharing options for: Keep the rivalry, even if not annually

I've been pretty clear where I stand on this whole rivalry thing - I like it. I've got too many memories and too many emotions invested in it just to up and end the whole thing. My life was shaped by this rivalry, as sad as that may sound. It lifted me up out of some of the hardest moments I've ever experienced and offered me lasting moments I hope to share with my children years from now.

This is college football. It's all about the pageantry and rivalry. It's about hating a team for no other reason than the logo on the side of their helmet. It's about circling that game months in advance knowing what it means not just to your university, but your community. Here in Utah, it is consistently the most important sports week in the state - one that everyone counts down to because so much pride is on the line.

Now I understand times change and certainly the college football landscape is radically different than it was even three years ago. However, this rivalry should endure. It should endure because, whether we want to admit it or not, Utah football is inextricably linked with BYU. We might feel we've outgrown this rivalry, and in some ways, we have, but not to the point where we officially close the door on it.

My hope is that this rivalry can survive, even if I believe it can't in its current incarnation. The times have dictated that playing this game annually, as it has been played since World War II, just might not be feasible. I get that. I understand that. But that doesn't mean we should abandon over 100 years of history just to placate those who might be pushing for change.

The saddest thing I've seen since this conference realignment overtook college football in 2010 has been the death of so many historical rivalries. Pitt and West Virginia? Done. Texas and Texas A&M? Gone. Kansas and Missouri? No more. Nebraska and Oklahoma or Nebraska and Colorado? Maybe one day when the two meet in the BCS (or playoff, whatever it may be) - but none of that exists anymore. They've been left behind for bigger and better and richer conferences.

Not to denigrate those moves. They make sense for those universities and certainly you've got to put your own obligations and priorities ahead of that of your rivals', but it doesn't mean you lose sight of what makes this sport one of the best in the world.

I like the rivalry. I like the anticipation of the game. I liked 54-10. I liked Brandon Burton's block. I liked busting the BCS against the Cougars knowing, specifically in 2008, we were living their dream.

The rivalry is about this: 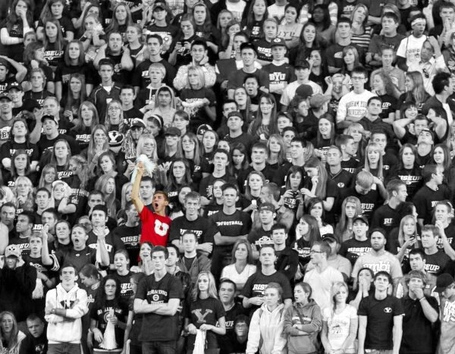 It's starting the workweek with a big grin on your face because your coworker, a BYU fan, has to eat a whole lot of humble pie.

But if it has to evolve, if it has to change to every two or three years, I understand. Our program should not be held hostage by an opponent that isn't in our conference anymore. If Kyle Whittingham truly believes it's in this program's best interest to stop playing BYU yearly, I fully and confidently embrace that mindset. It's this idea that we need to completely end ties with our rivals to the south that concerns me. I don't see anything gained from that.

So, keep the rivalry. Embrace the rivalry. But yes, if scheduling it yearly is impeding the growth of the program, by all means, scale it back. But don't end it. Don't end something that has been so spectacular for this program - for this state. Don't end one of the best rivalries in college football. Keep it going. Let's keep beating the Cougars. It's something we've been good at this past decade, so, why not let it continue - even if it's not annually?