Share All sharing options for: Your favorite Utah football highlight

Last week I mentioned that I would be looking at the best games of 2011 throughout this off-season as a way to kill time. I want to expand on that a bit and ask you what your favorite Utah football highlight of all-time is. I know this is probably a hard question, since there are so many to choose from, but you know, that's the beauty of discussion - hopefully we'll be able to relive a great deal of those moments.

I don't want you to make a blanket statement by saying just a specific game. That's a cop out and probably would give us a list filled with nothing but mentions of the 2009 Sugar Bowl. It was a great game and we all loved it, but let's get a bit deeper than that. Maybe there is a play from that game you'll never forget. It could be the Utes' first touchdown, or their third, or maybe the final Alabama fumble with five or so minutes left to secure victory. So, this is about your favorite highlight - that one play you just know, twenty years from now, you'll still remember where you were when it happened and can still explain, in great detail, the awesomeness of that play.

Maybe it was John White IV's touchdown against Georgia Tech in the Sun Bowl. It could be Brandon Burton's block in the '10 BYU game. Who knows, maybe you'll reach all the way back to an era not much talked about on this blog - maybe Eddie Johnson high-fiving a BYU cheerleader after a touchdown in the Utes' epic 57-28 rout of the Cougars. 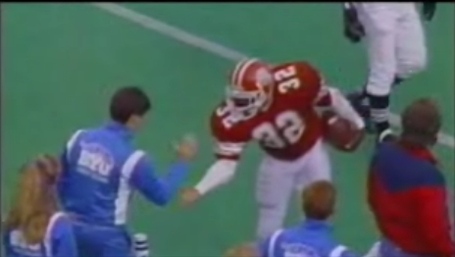 Whatever it is, whatever the moment, let's hear it.

I have a lot of great memories and if you're like me, it's probably really hard picking the best. But in terms of pure jubilation as it happened, I've got to go with Louie Sakoda's field goal against Oregon State in 2008. This memory sticks out because I felt the Utes overcame such great odds in the final minute or so to win that game and the fact it happened the way it did - down 8 with 90 seconds left to go and actually finding a way to win it in regulation - just adds to the greatness. Sure, Freddie Brown's touchdown in the TCU game a month later certainly rivals Sakoda's kick, but something about that Oregon State victory, that moment the kick sailed through the uprights, was absolutely, positively magical.

I think that was the moment I knew Utah would go undefeated. It was not a guarantee by any stretch of the imagination, especially with the Horned Frogs and BYU still left to play, but I just knew. That's not to say I didn't have my doubts, especially during a good portion of that TCU game, but when he lined up for the kick and then made it, the universe aligned.

What really makes this such a great moment was that I had completely written the Utes off prior to their final touchdown drive and had already started going over in my head what I would write on Block U later that night. It was pretty devastating at the time because the Cougars had yet to lose and were gaining momentum until everything came crashing down against TCU about a week after this game. So, you just knew their fans would be crowing and it would be difficult to swallow after watching the team go into Ann Arbor and beat Michigan and then defeat Air Force in Colorado Springs. We all felt if the Utes could get out of the first few weeks undefeated that a run at perfection could realistically transpire and here it was, a week after the Beavers had upset #1 USC, and it all felt like it was going to come crashing down.

When Oregon State scored to go up eight, and Utah took over, my head was spinning. I wanted out of the stadium because I don't handle losses well and especially losses that happen in important games. They're not easy to shake off and this one was going to be hard. I could feel the depression setting in and I hadn't really felt that at home since, probably, the Boise State game two years prior. It was tough. I was fidgeting and moping and being a complete pain in the ass to my friend Josh, who had the misfortune of sitting next to me that night.

I had already resigned myself to defeat and was just waiting for Brian Johnson to throw the game-ending interception so that I could just get out of the stadium and privately mourn the ending of our BCS dreams.

Well that interception never came and instead, we all witnessed a game-tying touchdown & two-point conversion that jolted the season alive and gave every single one of those fans in attendance reason to believe - at least those who stuck around to watch it unfold. Now, most fans did the right thing and stayed, even after it looked bleak, but a few fans did head for the exits. I'm convinced to this day that they either were within inches of leaving the stadium just as the Utes were setting up for the game-tying sequence and hurried back to their seats, or somehow snuck back into the stadium after just barely leaving before it all happened. That's the only reason I explain how the crowd grew in capacity from the Beavers' kickoff after their score to Louie Sakoda's game-winning field goal.

If you were there, hell, if you were on your sofa watching at home, you know just how improbable that win was. In a matter of minutes, the entire stadium went from complete doom to uncontrollable celebration.

The great thing about the kick was knowing that it was good even before the football hit the tip of Sakoda's foot. So, the entire time between Whittingham's timeout and the eventual kick was spent plotting our celebration, charting a path to the field so that we could storm it as quickly as possible. There was no question - this kick was going to be good and Utah was going to win this game in insane fashion.

And it was. And they did. And we celebrated. I was hugging fans I had never met. I was high-fiving kids and adults and old people and it was just amazing. There have been many great victories and great moments, but the time leading up to, and shortly after the kick, was just it for me. That is why we love sports. That is why we attend games and cheer for our teams and deck ourselves out in our team's colors. It's all for a moment like that. One play, one moment that defines why you're a fan.

Storming that field, and I don't care if people felt it was beneath us because Oregon State wasn't a great opponent, with everything that had happened, is just unrivaled. That's what I want heaven to be like. That's what I hope it is.

Because it was fucking awesome.

And that's the one memory I think I will carry with me for the rest of my life.