Share All sharing options for: Utes prepare for scrimmage, will don new black helmets this season

Today's scrimmage might be the most important point of fall camp to date for the Utes. With a potential quarterback controversy brewing (as unlikely as it is), the scrimmage could indicate even more the role each quarterback will have heading into the final stretch before the start of the season.

Monday, Kyle Whittingham mentioned the possibility of Travis Wilson, Utah's freshman quarterback, pushing Jordan Wynn for the starting job. While this outcome seems unlikely, it's still something coach feels comfortable floating. It's entirely possible he's doing it to stoke a fire under Wynn, then again, maybe there is more to it.

I'm guessing we'll have definitive answers, or at least something more concrete, after the scrimmage.

One player who will sit out the scrimmage is Sam Brenner, who injured his shoulder Monday and is expected to miss a week or more of action. He joins a growing list of injured offensive linemen, though this injury doesn't seem to be serious (it just continues a negative narrative I wish we could break).

Beyond that, as already reported here, the Utes will unveil a new black helmet this season. They're expected to wear it occasionally throughout the year along with more uniform combinations, something they did last season.

Here's a rough mock-up of the helmet I did, so, it's nothing official and certainly not perfect - but it should give you an idea: 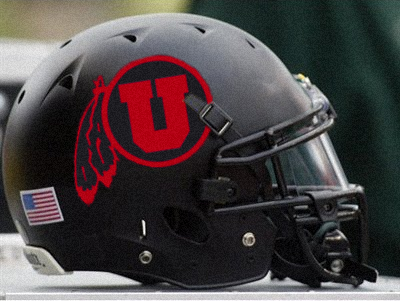 So, it should be a big day and hopefully we see no injuries or the coaching staff will have to open a mobile hospital somewhere on the practice field. We could call it M*U*S*H!