Turn on your television and you'll quickly realize it's election season. The non-stop ads, especially if you're in a swing state, are probably already grating your nerves. Get used to it - you've still got two months of this stuff.

We're not having an election for Utah quarterback, though it kind of feels like we are. There are two camps: those who want Jon Hays lining up Saturday and those who want Travis Wilson. Both sides have compelling points and certainly it's a tough question, with not only this season, but future seasons, riding on it. Still, after thinking it over for the past few days, going over both points intensely, I've decided Jon Hays is our man.

This isn't anything against Travis Wilson. I think, in the end, he'll prove to be the better quarterback. But right now, at this moment, with so much uncertainty on the line, Hays, who has the experience and composure to lead this offense, should be our choice. He needs to be our choice. Yes, Hays is not a flawless quarterback and he certainly has made mistakes in the past that have left many fans, and this blog, questioning our support. But now, when things matter the most, we must choose the quarterback who's best equipped to deal with the challenges of today.

Wilson is a good man, who has shown flashes of some brilliance throughout his short tenure on the Hill, however, he has not been handed the keys to run an offense and really, are we ready to stake an entire season ... and his future ... on such an unknown? I don't know about that. I just don't think Wilson is ready to handle the day-to-day responsibilities of leading an offense that has a porous offensive line, and because of that, I find myself coming back to Jon Hays.

I vote for Jon Hays. 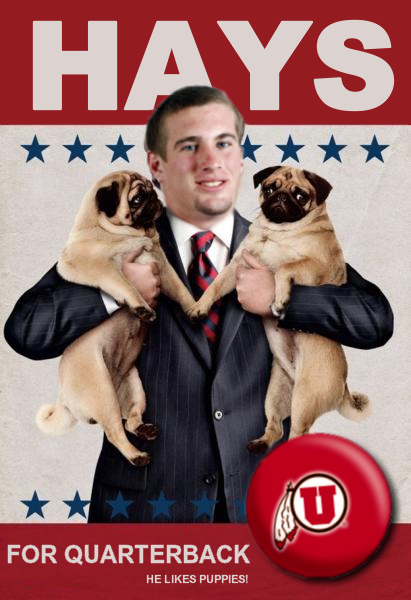