A rendering of the long-awaited project has finally been released.

After years of speculation, wonder and amazement, Dr. Chris Hill has unveiled the Rice-Eccles Stadium expansion plans - or at least one rendering. Though he's quick to point out that any potential start date on expansion is still up in the air, we at least get a glimpse of what the new stadium could look like if it's finally, and eventually, expanded. 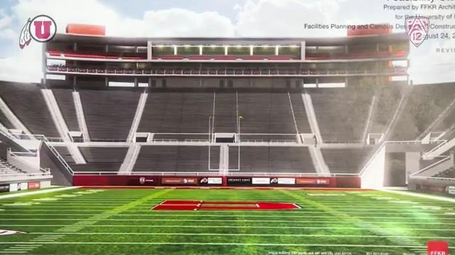 As you can see, the expansion will totally enclose the south end zone, which would add an additional 10,000 seats - bringing capacity up to roughly 55,000.

A word of caution, though. Hill doesn't sound entirely sure expansion is in the cards. He mentions how 10 of 12 Pac-12 programs in the conference are looking at reducing their capacity and that he wants to make sure this is something the school needs to do before going ahead with the idea.

It should be pointed out that while 10 of 12 schools are looking at capacity reduction - those stadiums will almost all certainly be larger than Utah's. Currently, the Utes have the second smallest stadium in the conference, and I don't see that changing. No team is dramatically reducing their capacity. Take Washington, for example. Husky Stadium was 72,500 pre-renovation. The new stadium is expected to seat 71,900 - so, while technically a reduction of capacity ... it's not by much.

Most stadiums will still exceed, and in some cases, far exceed, Rice-Eccles.

Anyway, we'll see where this goes. Personally, I love the new look. What about you?